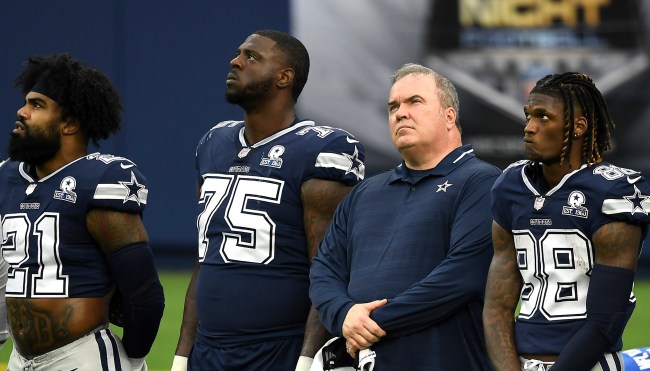 Despite the Dallas Cowboys miraculously still being in first place in the dismal NFC East with a 2-4 record and allowing a league worst 36.3 points per game, the ship is starting to take on water as some players have begun airing their grievances with the coaching staff to the media.

One anonymous Dallas player even went so far as to say the Cowboys coaches “aren’t good at their jobs.” (Jerry Jones would disagree. At least publicly.)

On Tuesday, head coach Mike McCarthy addressed those comments, claiming he hadn’t heard anything like that and admitted that the team’s arrow is headed in the wrong direction.

Mike McCarthy was asked if the #Cowboys have improved through the first six weeks of this NFL season.

MM: "Have we improved? … no, our treadline is not pointing in the right direction."

McCarthy also added that when it comes to issues such as this “it’s important to handle things as men” – something his former quarterback in Green Bay, Aaron Rodgers, echoed during an appearance on The Pat McAfee Show.

“You never want to hear the inside sources, or somebody from the inside, or somebody not going on the record, anonymous quotes or whatever,” said Rodgers when asked about McCarthy’s situation in Dallas. “You don’t ever want any of those things.

“So, you know, that division obviously has been a little down this year with, I think Philly’s 1-4-1 and the other two teams are 1-5, but they still have a lot of game against each other. It’s a long season.

“Obviously, losing Dak doesn’t help because he was off to one of the greatest starts in history as far as the amount of yards he was passing for and efficiency, that tragic injury, but Mike knows how to deal with any type of adversity. You know, we went through ups and downs at times, mostly ups in Green Bay, but I know Mike knows how to steer those difficult situations.

“But it doesn’t matter who you are, somebody talking about a player or a coach… like, you never want those unnamed sources to come out, that anonymous stuff, I think that’s some chickensh*t.”