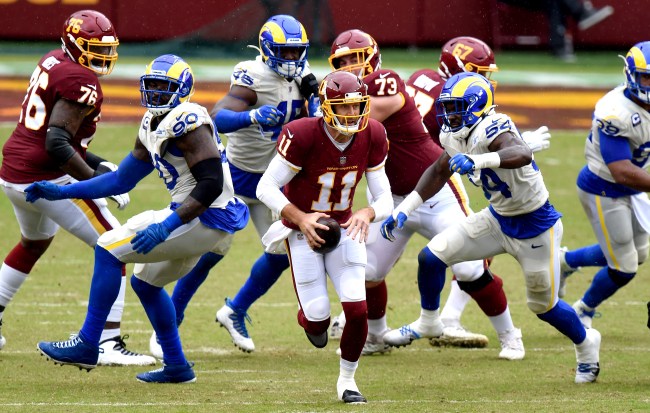 How strange is it that on the very same day that Football Team quarterback Alex Smith made his incredible return to the football field after nearly losing his leg (and life), Cowboys quarterback Dak Prescott suffered one of the gnarliest leg injuries ever seen in the NFL?

Not too long after Prescott suffered a compound fracture and dislocation of his leg and ankle in the game versus the Giants, several athletes who had suffered similarly devastating leg injuries took to social media to express their concern and support for the 27-year-old Dallas QB.

Panthers quarterback Teddy Bridgewater, who almost lost his leg due to an injury and has made an incredible comeback, sent a message to Prescott, telling him, “You got this.”

Celtics star Gordon Hayward related how Paul George of the Clippers helped him through his similar injury because he too had been through it, writing, “If there’s anything I can do to help, don’t hesitate to reach out. You’re not alone!”

Of course, everyone expects Alex Smith, being a quarterback who suffered his own terrible injury, to have done something similar, sending his well wishes to Prescott and offering assistance in his recovery.

And his reason why is more than valid.

During his appearance on The Dan Patrick Show on Tuesday, Smith explained, “You know, for me especially with Dak I feel like we have a ton in common because he played for my same coaches all through college, you know, a bunch of, Dan Mullen coached him in college, my good friend Brian Johnson was his quarterback coach all through college. So that’s a guy I keep up with a lot, certainly in the division as well, so I have a ton of respect for, I love his game, I love him as a human being, everything.

“So I’d just gotten home from the game, you know, celebrating you know with my wife and kids and we had the Cowboy game on so I watched it happen
live.

“And, you know, I feel like I’ve become a little bit of an expert with the lower leg, so I knew it looked like his ankle immediately.

“For me, yeah, I’ve been thinking about him a lot. I’ve checked up on him through our mutual friends to see how he’s doing.

“I thought a lot about shooting him a text, but part of me also didn’t want to scare the hell out of him by shooting him a text [laughter] and getting him thinking he might be headed down this road. I’ll let the infection risk kind of get out of the way and hopefully reach out here soon.”

Watch Smith’s entire segment which includes him discussing what it was like to play on Sunday after having to go through so much rehabilitation.