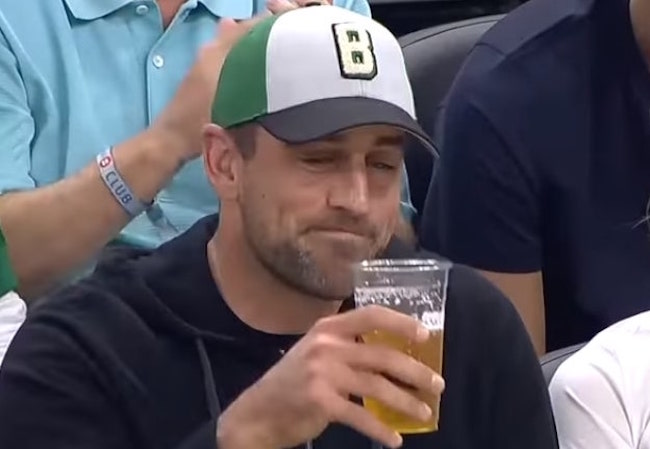 Professional athletes spend a solid chunk of the year surrounded by players who all rely on each other for their success, much of which is reliant on the camaraderie, bonds, and chemistry that they develop during their time together. As a result, you’ll hear a lot of guys who make a living playing sports refer to their teammates as “brothers” based on the close relationships that tend to form in the locker room.

Everyone knows you’re not truly friends with someone unless you have at least one inside joke that would make people on the outside respond, “Um, haha” if you attempted to explain it to them, and ten years ago, Packers quarterback Aaron Rodgers came up with one of his own when he started referring to third-string backup Graham Harrell as his fraternity brother.

Harrell recently spoke with ESPN for a deep-dive into Rodgers’ inherent weirdness and said that sparked the beginning of a saga that ended with one of the funniest stories I’ve come across in recent memory. He says his mentor decided to really commit to the bit to a point where he dubbed their imaginary frat “Tau Kappa Epsilon”, and while it’s unclear if he knew that was the name of an actual frat when he chose to go with it, he soon discovered that was the case when a college kid working as a ball boy for the team informed them he was a current TKE member.

The unnamed St. Norbert College student shot his shot and asked if the duo would be interested in attending the “Carnation Crush,” a party the frat was hosting in conjunction with a sorority at the school. Rodgers happily agreed, telling a skeptical Harrell, “There is no way in the world we’re missing this.”

After showing up, Rodgers eventually found himself playing some flip cup (which apparently went about as well for him as the time he tried to chug a beer during a Milwaukee Bucks game) and the night culminated with him getting down on one knee and attempting to mouth along with the words to a chant during a ceremony straight out of Midsommar that involved a sorority member being showered with flowers after being named the night’s “queen.”

We already have plenty of evidence that Rodgers is a fairly weird dude who also has a pretty great sense of humor and the entire story is worth a read if you want more insight into both of those aspects of his personality. He may be a fairly divisive figure who’s been at the receiving end of a whole bunch of hate over the years, but if you can’t give props where props are due for what is an objectively hilarious move, there’s probably nothing else he can ever do to change your view of him.