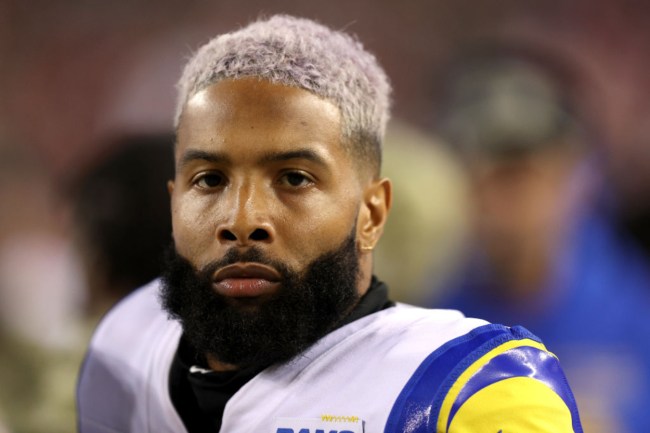 Odell Beckham Jr.’s first game as a Los Angeles Ram did not go well. The Rams were embarrassed by the 49ers 31-10 in what was the team’s second straight loss and OBJ himself managed just 18 receiving yards on two catches.

The Rams have all of the sudden gone from many people’s Super Bowl pick to a team that has looked mediocre in just a two-week stretch.

While all that much shouldn’t have been expected from OBJ on Monday night seeing as how he’s only been with the Rams for a week, that didn’t stop people from questioning whether or not his presence has already negatively affected this team.

“I’ve liked a lot of what [the Rams] have done, but the last few moves, I don’t want to say desperation because I don’t feel that way. But I definitely got the feeling watching them last night that it has totally shook the chemistry and the foundation and the bedrock of this football team,” Aikman explained on 96.7 The Ticket.

Aikman isn’t only referencing OBJ there, the Rams also added Von Miller to the fold recently which is another big-time name thrown into the mix of an already good football team.

Related: Rams’ Deleted Tweet About Signing OBJ May Have Played A Role In Him Ultimately Choosing Los Angeles

He later spoke about OBJ specifically and how his being on the field changes things for Stafford.

“Matthew Stafford throws an interception on the opening possession because he’s trying to get the ball down to OBJ,” Aikman began. “Whether he stopped on the route or not, he’s not going to complete the pass. There’s two defenders back there.”

“But I think Matthew now feels some of the pressure that maybe Baker Mayfield felt of, hey, we got to get this guy involved, or he’s in the game right now because he’s going to take this deep route and I’ve got to find a way to get this ball in his hands because that’s why he’s playing on this play.”

Aikman certainly makes some valid points, but again, OBJ hasn’t been with this team for more than a week at this point. If things continue to trend downward, Stafford struggles, and OBJ doesn’t get his touches, then yes, we can absolutely start seriously discussing how the Rams’ additions messed up this team’s chemistry in a major way.