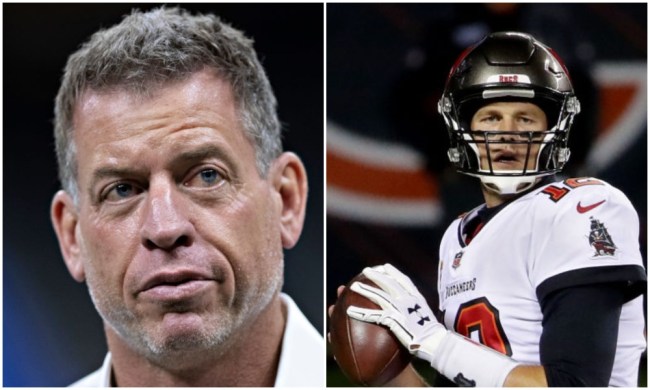 Tom Brady’s performance against the Bears on Thursday night is one he’ll want to forget. Not only did he have an embarrassing fourth down blunder late in the game, but he also went just 25-for-41 through the air for one touchdown while also being sacked three times.

It was a tough matchup for Brady and the Bucs as the Bears’ defense is one of the best in the league, particularly their defensive line. And while Tampa Bay ended up losing by just one point, 20-19, Troy Aikman is concerned about how Brady may bounce back after a tough loss like that, particularly at 43-years-old.

“When you’re 43-years-old, as you start to get older, then it becomes harder to come back from these types of games,” Aikman said following Tampa Bay’s loss, according to NY Post. “It’s a good thing it’s a Thursday night, he has time to rest. But this offensive line is going to have to shore some things up, which they will.

Late in the game, Chicago’s defensive line really outplayed the Bucs’ offensive line and proved to be a real difference-maker by getting Brady to the ground. That’s another concern for Aikman when it comes to Brady, not only taking sacks, but taking a couple of brutal shots on Thursday night.

“If he’s continues to take hits like this, then that’s when you start calling into question, ‘Ok, how much is Tom going to be able to take and how effective can he be from one week to the next?’” Aikman said. “It’s not arm strength…Can he physically come back and nights like this make it awfully tough.”

Brady’s age was, and continues to be, the biggest question mark surrounding him. Father Time is unbeaten and while Brady’s most definitely shown that he can continue to play at the highest level at a very successful rate. The fourth quarter against the Bears though was the first ‘oh, wait a second’ moment not only through Aikman’s eyes but NFL fans around the country.

We’re only 5 weeks into the NFL season, this journey for the 43-year-old quarterback is just getting going.

Next up for Brady and the Bucs is a showdown against the Packers.