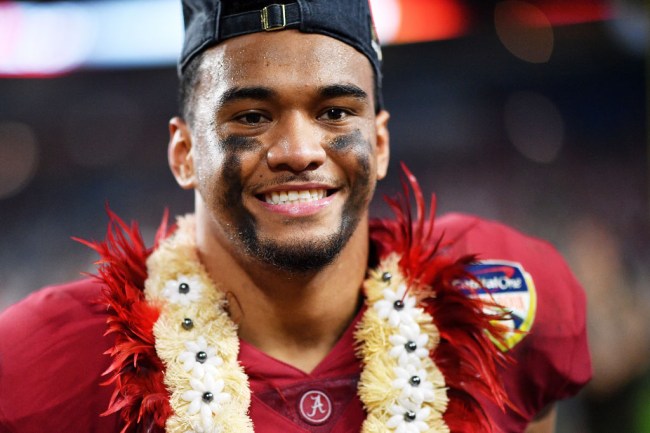 It’s been almost two years to the day when Nick Saban called on Tua Tagovailoa to step into the pocket after Jalen Hurts failed to impress in the first half of the 2018 College Football Playoff National Championship, which was an incredibly bold move given the stakes.

However, the freshman quarterback managed to reverse Alabama’s fortunes and forced overtime before cementing himself as a legend in Tuscaloosa with an absolutely insane game-winning touchdown throw that secured yet another title for the Crimson Tide.

Tagovailoa took the reins away from Hurts yet again after being named the team’s starter and proceeded to prove his dazzling performance under pressure was no fluke during a sophomore season that ended with him being named a finalist for the Heisman.

The quarterback was expected to pick up where things left off this year and it seemed like a forgone conclusion that he’d be the top pick in the 2020 NFL Draft and head to a Dolphins team that was reportedly planning to tank in pursuit of him.

Unfortunately, everything came tumbling down when he suffered a hip injury that brought his season to an end and dramatically altered his future landscape thanks to the uncertainty surrounding the long-term impact of the setback.

Last month, Tagovailoa said he was still entertaining a return to college football in an attempt to boost his draft stock. While his value may have fallen, the consensus seems to be he still has what it takes to be taken in the first round and it appears he’s more than fine with that potential outcome.

On Monday, Tagovailoa held a press conference with Nick Saban by his side and announced he’ll be trying his luck and hope his name gets called sooner than later when April rolls around.

It might seem like a risky decision but he still stands to make a boatload of money if the projections are correct, which is infinity times more than he’d make if he risked injury by playing another season. As a result, I’d say he’s making the right move.