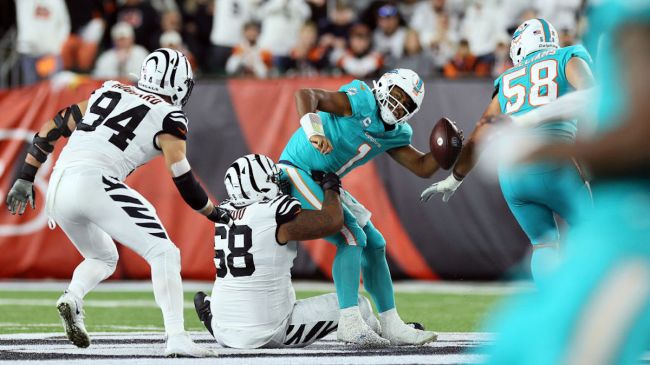 The fastest way to recover from a concussion is to answer a litany of questions from a bunch of old dudes in suits in a likely well-lit office, everyone knows that!

Luckily for Tua Tagovailoa, that’s exactly what he’ll be doing when he’s questioned by both the NFL and the NFL Player’s Association about the absolute debacle that was the way the Dolphins handled his concussion. The interview will happen today, Tuesday, October 4, and the league will release its findings publically (or at least so they say).

“Dolphins quarterback Tua Tagovailoa is speaking today with reps from the NFL and NFLPA as part of the joint investigation into his Sept. 25 concussion check, I’m told. The hope is to wrap up the investigation within the week. The NFL has said findings will be released publicly,” NFL insider Tom Pelissero reported.

Tagovailoa was briefly knocked out of the Dolphins game against the Buffalo Bills on Sunday, September 25 with what he and the team called a “back injury” despite everyone clearly seeing the woozy QB stumble to his feet after a blow to the head.

Then, just four days later on Thursday Night Football, Tua was violently knocked out of the game against the Cincinnati Bengals with yet another head/neck injury. This time, however, Tua was tended to on the turf for almost ten minutes before doctors eventually stabilized him, cared for him off the field, and brought him to a nearby hospital.

Following last Thursday’s concussion against the Bengals, Tua has been officially ruled out of this weekend’s AFC East matchup against the New York Jets.