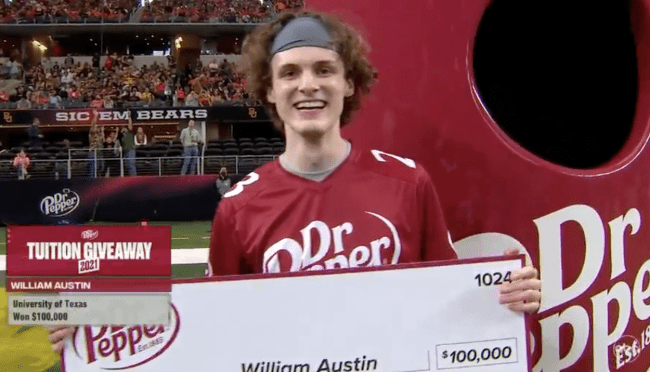 There is a lot of debate surrounding the Dr. Pepper Tuition Giveaway. As the annual competition takes place during college football’s conference championship week every year, fans of the sports get into heated arguments over the rules.

The competition is simple. Two students compete against one another to throw the most footballs into a small opening from five yards away.

Considering that the competition takes place at only five yards, there is a lot of conversation to be had surrounding the strategy. Throwing overhand, like a quarterback, is difficult and rarely wins. Using a chest pass approach is typically more successful.

However, it comes with a significant amount of scrutiny.

If you use the chest pass in the Dr Pepper Halftime competition, you will be slandered. This is your one and only warning.

As Championship Week is among us, I’d like to make my annual statement.

BAN THE CHEST PASS IN THE DR. PEPPER CHALLENGE.

What is Joe Biden’s plan to eliminate the chest pass in the Dr. Pepper Tuition Giveaway???

As Saturday’s Big 12 Championship went to halftime, it was time for yet another competition. A University of Texas student by the name of William Austin was this year’s winner and he became the first Longhorn to win at the Big 12 Championship since 2009.

His strategy, however, was unique.

Austin, with his lettuce flowing from his headband, neither threw overhand nor took the chest pass approach. Heturned the Dr. Pepper Tuition Giveaway into a pop-a-shot. It was the ideal form.

He used a quick release and repeatable motion that allowed him to already be reaching for the next ball while the first ball is in the air. Brilliant.

As a result of his perfect form, Austin was nearly automatic.

Austin’s one-handed floater not only changed the entire landscape of the Tuition Giveaway, but he is $100,000 richer because of it.