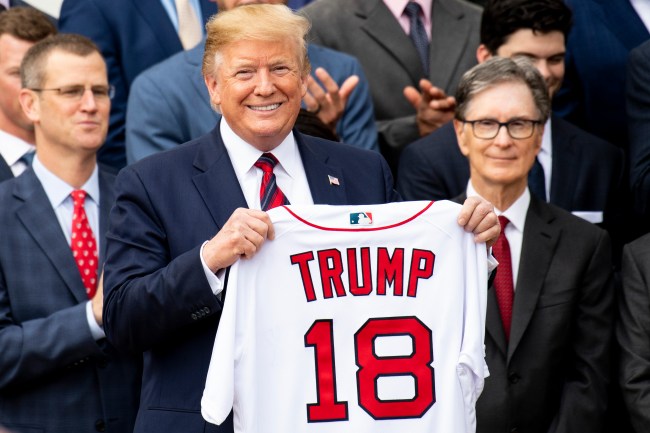 The Boston Red Sox just can’t win with the White House, guys. After earlier reporting that someone over at 1600 Pennsylvania Avenue accidentally spelled the iconic team’s name wrong yesterday while announcing the franchise would visit to celebrate last season’s World Series title — with the team calling them the “Boston Red Socks” — another gaffe happened today while the champs were visiting President Donald Trump.

Whoever’s running the communications department over at the White House might need some help with their sports knowledge, because after the Rod Socks mistake, someone sent an official transcript out referring to the Boston Red Sox as the 2018 “World Cup Series Champions.” In the words of Vince Lombardi, “What the hell’s going on out here!?”

The White House has sent out a transcript of the presidents appearance with the “World Cup series champion” Red Sox. pic.twitter.com/G3BVlHvzmA

With the FIFA Women’s World Cup set to kick-off this summer, maybe someone in the White House communications department was just a little anxious? Or maybe they literally have the dumbest people on planet earth working for them. Either way, Twitter absolutely roasted everyone who had a hand in f*cking things up for the Boston Red Sox for the second time in less than 24 hours. Take a look at some of what people were saying on social media below.

Big shout out to whoever in the White House Press Office hates the Red Sox as much as I do. Well played. pic.twitter.com/HGzsRGDZMr

I know there are bigger issues to focus on than clerical errors by WH staff, but a trifecta today:

First, the White House calls them the “Red Socks.” Now, they seem to be the “World Cup Series Champions” pic.twitter.com/oiZztyufs5

I will never forget those crazy weeks back in 2004 when the Red Socks won their first World Cup Series.

Yes, they actually put World Cup Series in the headline of the press release after spelling Boston Red Sox wrong earlier in the day. https://t.co/R1KrteUn1f

Congrats to the Red Socks on winning the World Cup Series ✌️ pic.twitter.com/7ofCWqMCkU

This White House is breathtakingly incompetent. They can’t even invite a baseball team to the White House without messing up. They called them the Red “Socks” and then referred to them as the “World Cup Series” champions. Not exactly reassuring given everything else they oversee. https://t.co/Y1n2dhdoYl

Visiting the White House is supposed to be something special to championship teams, where they feel honored to stand in the hallowed halls of the Oval Office as they mingle and tell dad jokes to the President. But, given the mistakes of the past couple of days, any Boston Red Sox player or executive who made the trip probably feels about the same as if they walked into some random kindergarten classroom and had a bunch of finger-painting kids run up to them who know nothing about baseball. Yeah, that’s how pathetic and bad the mistakes at the White House have been.

Maybe this is just one big troll job and someone at the White House just really hates the Boston Red Sox. Or maybe it’s time for The Donald to go in there and start yelling “you’re fired” to a bunch of people, because this is pretty bad.