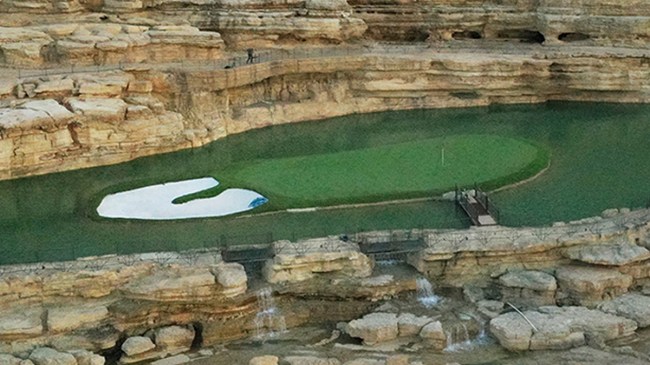 There are a ton of different factors that make it virtually impossible to definitively calculate the odds of hitting a hole-in-one. However, according to the calculations made by people smarter than myself, the “average” golfer has around a 1-in-12,500 chance of acing a typical par-three.

“Typical” is probably one of the last words I’d use to describe the 19th hole (yes, you read that right) at Payne’s Valley,” the course that sits tucked inside the Ozarks just outside of the Bible Belt vacation mecca that is Branson, Missouri.

Payne’s Valley was the first public course dreamed up by TGR Design, the company led by Tiger Woods (which was also behind the creation of slightly more exclusive destinations including Bluejack National and El Cardonal). The gorgeous tract’s defining feature is the final hole known as “The Big Rock,” the “bonus” hole with an island green located in the center of a limestone quarry.

Payne’s Valley opened up for business back in 2020, and according to Golf Digest, a dozen aces had been recorded on the 19th hole heading into last month.

However, that number rose to 14 on August 18th thanks to Susan Stevens and Billye Hollister, who managed to defy the odds that sit at an estimated 17 million-to-one by each sinking a hole in one in “the span of a few minutes”—a feat that was captured on video.

The Payne's Valley 19th hole had only seen 12 hole -in-ones since opening in 2020. Around noon on Aug. 18th, Billye Hollister and Susan Stevens found the bottom of the cup in the span of a few minutes! pic.twitter.com/uQPU9hQvzU

This isn’t the first time a unique ace (or, in this case, aces) has unfolded on a course Tiger designed; in 2016, an 11-year-old managed to hit the first hole-in-one ever recorded on the short course at Bluejack in front of the man, the myth, and the legend himself.