Tylan Wallace Opts Out Of The Cheez-It Bowl At Halftime, Marking The First Mid-Game Opt Out In College Football 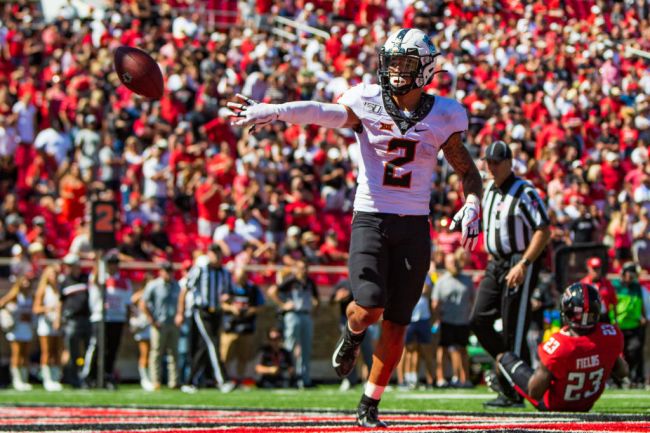 For players to opt out of a college football bowl game is no longer uncommon, but to do so at halftime of said bowl game is a new one. Oklahoma State wide receiver Tylan Wallace (to my knowledge) became the first to do so on Tuesday. The Cowboys’ top weapon played the first 30 minutes of the 2020 Cheez-It Bowl, went into the locker room at the break, and then proceeded to sit out the final two quarters.

The 6-foot-0, 190-pound senior recorded 53 catches for 877 yards and six touchdowns in eight conference-only regular season games in 2020 and added six grabs for an average of 7.5 yards against Miami. He came out of the locker room in full pads prior to the second-half kickoff and never switched into street clothes, but he was not in on any of the team’s offensive possessions. Late in the third quarter, the broadcast reported that it was a “personal decision.”

Wallace is projected to be drafted anywhere between the third and the sixth rounds of the upcoming draft, but this year’s receiving class is full of talent and his stock will rise or fall based on his pro day, combine and pre-draft evaluations. Prior to the top-25 matchup, Wallace told reporters that he wanted to finish out the season “the right way in his eyes” on the Sunday prior.

Asked Tylan Wallace (@OfficialTylan2) why he decided to play in #OKState’s bowl game when other players in his position might have opted out — “it means a lot to me” pic.twitter.com/7JSqjvNJJ4

While the decision may seem strange, some reports say that the plan to play only one half was agreed upon with his coach Mike Gundy prior to the game. Whether that is true or not, Wallace felt as though he proved enough throughout the year and in his short bowl appearance and chose to support his team from the sideline.

I think I love it. Let GMs know he can make plays and be a great teammate on the sideline. Ultimate game tape.

Part of the decision may have come after seeing an injury to his opponent. Hurricanes quarterback D’Eriq King, who is considered a 2021 Heisman Trophy candidate after announcing that he will take advantage of the extra year of eligibility that was granted by the NCAA due to the COVID-19 pandemic, suffered a knee injury in the first quarter that forced him to leave the game and return in street clothes on crutches.

Wallace was named a Biletnikoff Award finalist in 2018 after recording 12 touchdowns and 1,489 yards on 86 catches but missed the second half of Big 12 play in 2019 after suffering a torn ACL. The injury concerns may have cast doubt. Whatever the reason, Wallace did not return to action and became the first in-game opt-out amidst a strange, unusual season that saw multiple players and full teams choose not to partake in bowl season.