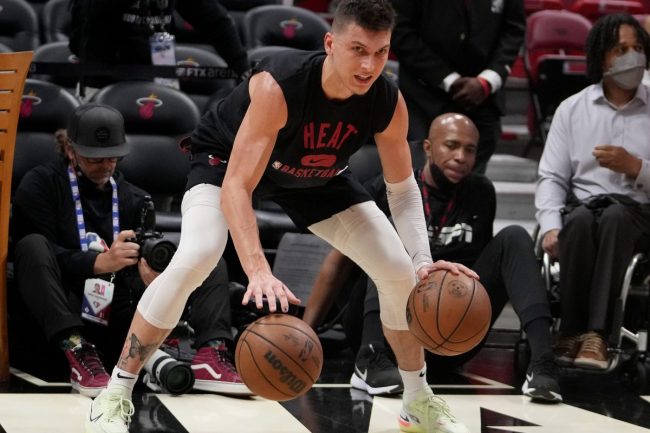 One Miami Heat guard is becoming the NBA’s newest offseason supervillain after absolutely embarrassing an elementary school aged camper on Monday. Tyler Herro pulled out a vicious crossover that caused the youngster to trip and fall in front of a huge crowd of both players and parents.

Herro was running a summer camp this week for grade schoolers to attend and learn about the game of basketball. As you’ll soon see in this viral video, many of these children are far from skilled when it comes to defending, dribbling, and shooting.

Again, they’re just learning how to play. That didn’t matter to Herro, who took no mercy in a one-on-one session with an ankle-breaking crossover. You’d think Herro might have a bit of sympathy, as he’s found himself in embarrassing public situations before. But no.

Not only does Herro brutally destroys the youngster’s ankles and confidence, but he also then throws down a dunk for good measure.

Fans were quick to respond to the video on social media.

Fans had some hilarious reactions after seeing Herro’s crossover at the summer camp. Take a look at the immediate response on Twitter.

If this ain't a villain origin story I dunno what is.

Herro may not have many fans after this showing.

he's not his herro after this.

Bro did that to his only fan

Herro’s future in the NBA is a bit uncertain at the moment. The sharpshooter is still with the Miami Heat, though that could change if the team decides to trade him. Last year, he averaged a career-high 20.7 points per night in South Beach. He’ll look to build on those numbers in 2022, but he might have one less fan cheering him on.