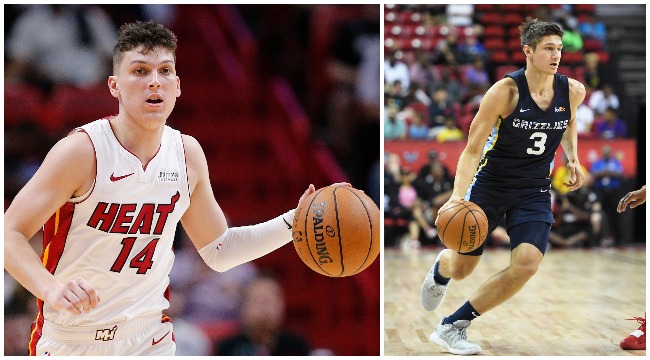 QUICK EXERCISE: Close your eyes. Shit, I guess you wouldn’t be able to read this then. Open them. When I say the name ‘Grayson Allen’ what is the first thing that comes to mind?

For most of us, we picture an extended leg tripping an innocent opponent. And we would be warranted in that image coming to mind seeing as Allen was reprimanded by the ACC for deliberately tripping two players as a sophomore and as a junior Allen was stripped of his team captaincy and suspended for a game after tripping an Elon player.

While Allen reflected thoughtfully on his behavior and admitting to feeling “bad” about the reputation he cultivated for himself, people don’t forget. Not then. And not three years later.

Case in point: During yesterday’s 120-101 loss to the Miami Heat, the Memphis Grizzlies guard was dropped by rookie Tyler Herro with what looked to be a routine ball fake.

Tyler Herro didn't even have to try to drop Grayson Allen 😳 pic.twitter.com/KUByovJ4Rc

Herro not only got the better of Allen on this play, but on the night all together. The Kentucky product finished with 14 points and 8 rebounds in 34 minutes, whereas Allen produced just five points and two assists in 21 minutes.

Oh, and Herro also won the internet. Which is obviously most important.

Me: why is Grayson Allen trending?
Me, one minute later: pic.twitter.com/Nr5SIgA08Q

It was only a matter of time before Grayson Allen tripped himself. https://t.co/dTIXCdUead

I saw Grayson Allen trending. Clicked on his name thinking I was going to see a vid of him tripping someone. Then I see him get crossed up and tripped himself. 😂

How Grayson Allen’s boys will be looking at him after getting his ankles snatched by Herro. pic.twitter.com/PyZmmENcuf

if there's one thing that we can all agree on, it's that we all enjoy seeing grayson allen eat shit https://t.co/aAAfx0hiL4