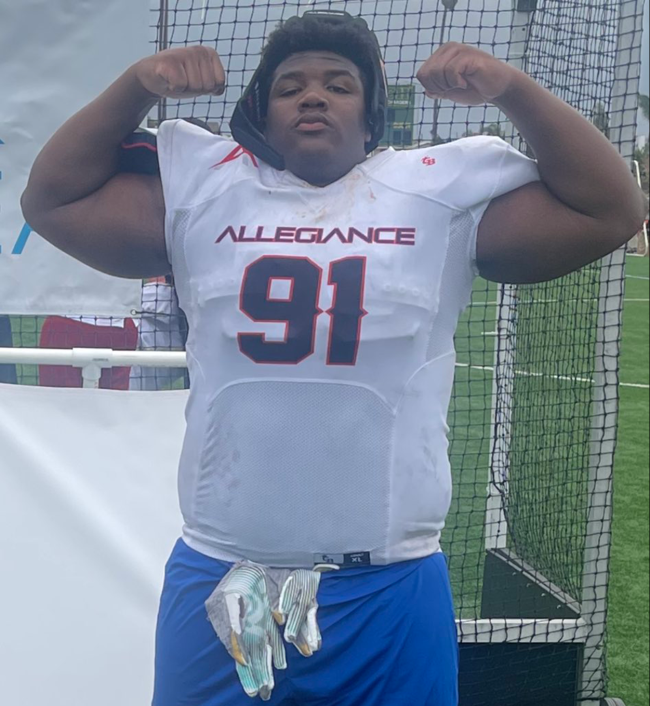 Tyler Parker may or may not be the world’s largest 14-year-old. If he isn’t, he has to be close.

The California-native is a rising sophomore in the college football recruiting Class of 2025. He is the top-ranked defensive tackle in the nation and it’s not hard to see why.

Parker is massive and football fans, analysts and players alike cannot not wrap their heads around how big he is. He stands 6-foot-1, 300 pounds, which is heavier than Aaron Donald, despite being less than half of the NFL lineman’s age, and he’s all muscle.

He runs a 4.9-second 40-yard-dash, which is downright crazy at his size. Parker also has a seven-inch vertical jump, max bench presses 300 pounds, deadlifts 415 pounds.

He never shies away from putting in the work.

Not too many 300lb 14 YEAR OLD people walking this earth can pull there body weight up for reps.. @PPIRecruits @BCollierPPI pic.twitter.com/QV26H5KYQ8

Got some Good Beach workouts in this week.. Just grinding in silence getting prepared For this upcoming summer .. pic.twitter.com/f25WK3mUXk

While his size and strength is one thing, Parker’s play is another. He is an offensive line’s worst nightmare. There is simply no stopping him once the ball is snapped, especially on the high school level, and he feasts on opposing quarterbacks.

Not only is Parker a monster in-season, he is dominating the camp circuit. Everywhere he goes, well-deserved praise follows.

As a result of his play and his size, Parker already has multiple Division-I offers. His first came back in April from the University of Arizona.

In addition to his offers, Parker has taken multiple unofficial visits to top FBS and FCS programs.

Had a Great Time at JSU today and meeting Prime Time! @PPIRecruits Is THE BEST TOUR IN THE WORLD ITS NOT EVEN CLOSE @BCollierPPI pic.twitter.com/wqeejuTOcf

At this rate, once his recruitment heats up, Parker is going to have his pick of the litter. He is going to be able to play college football — for free — at whatever school he wants, anywhere in the country. Rightfully so.