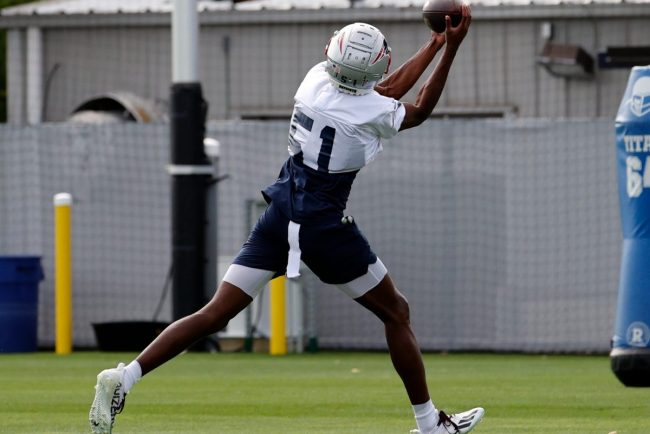 Rookie Tyquan Thornton is surprising folks at the Patriots’ training camp this week. The wideout has made some fantastic plays thus far, and he may be doing enough to crack the starting lineup.

The pass catcher is going viral on Tuesday after being seen putting New England defensive back Terrance Mitchell on skates.

The Patriots rookie has more to celebrate after losing his man during one-on-one drills today.

It’s not the first time he’s made headlines since leaving college. After finishing up a career with the Baylor Bears, Thornton nearly broke an NFL Combine record by running a 4.28 second 40-yard dash.

He’s impressed coaches with both his speed and route running abilities and seems to be making plays up and down the field.

Here’s Tyquan Thornton with an over the shoulder catch against Jalen Mills pic.twitter.com/USbeCuMUQM

That’s a welcomed surprise for a Patriots offense that’s been described as ‘distressingly bad,’ over the camp period.

Many have been quick to comment on Thornton’s play to this point.

Tyquan Thornton has already landed the respect of his coaching staff and teammates. Now, many of the media are beginning to take note.

He’s reportedly earned some playing time with the first-team offense and appears to be rising up the depth chart.

Tyquan Thornton has DBs looking high and low for him today, but no one can see him. Snapping off routes like crazy. And when he gets the separation…forget it. Gets better every day.

Thornton was an All-Conference performer at Baylor, reeling in 62 passes and 10 scores as a senior. For his career, he totaled over 2,200 receiving yards while also being a dynamic kick returner.

He seems to be earning his share of touches in the training camp session. If this performance continues, he’ll force the coaching staff to get him in the lineup as early as possible.