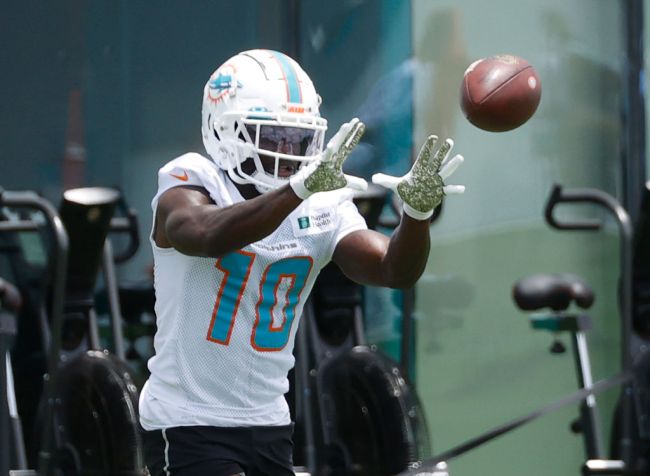 When Tyreek Hill was traded from the Kansas City Chiefs to the Miami Dolphins the whole football world knew he was going to be accepting a big downgrade at quarterback in pursuit of a huge contract. What we all didn’t know was just how bad he thought the quarterback situation was going to be when he arrived in Miami.

All Hill has done since joining the Dolphins is heap praise on Tua Tagovailoa and defend him in the media. However, it seems Hill couldn’t have been hearing much praise about Tua before joining the team. While speaking yesterday at OTAs, Hill revealed that he was expecting a much worse version of Tua than what he’s gotten so far.

#Dolphins WR Tyreek Hill on catching passes from Tua Tagovailoa: "At first I thought it was gonna be something crazy, the ball going all over the place. But Tua probably has one of the prettiest balls I've ever caught in my life."

The narratives surrounding Tua over the past year would certainly lead you to believe that this was what Hill had in store for him with Tua and the Dolphins. The possibility of Tua being replaced as the team’s starting QB is one that has been discussed for quite some time now.

There were even rumors the Dolphins wanted to trade Tua for an inactive Deshaun Watson in the middle of last season.

Maybe Tyreek Hill was exactly what Tua needed to start to change the narrative on him. Hill is easily the best receiver Tua has ever thrown to and will give him a weapon that defenses don’t seem to have an answer for.

In September we’ll finally learn for sure whether Hill’s initial expectations were right or if Tua really is as good as Hill is trying to make football fans believe he is.