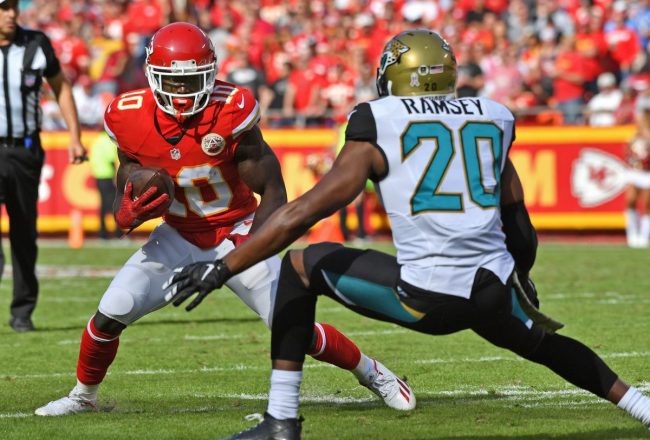 Tyreek Hill says that he would fight defensive back Jalen Ramsey if he could choose one player from the NFL. The wideout made the statement while appearing on Jake Paul’s show “BS With Jake Paul.”

Paul, who is a boxer in his own right, asked Hill if there’s a foe that he’d consider fighting if given a chance.

At first, Hill jokes that he’d call out Paul, himself, to match up in the ring. He then dove into his real answer, who he’s squared up against many times on the football field.

Here’s what he told the internet host.

“I really want some of Jalen Ramsey though, for real. If we just being completely honest right here.”

He brushed off the suggestion of Nate Robinson, who’s gotten into the boxing scene following his days away from the basketball court. But he says Ramsey is the perfect opponent.

While he says there’s no beef between him and the defender, he did call Ramsey a bully.

“I just wanna go at the bully.”

He notes that he chose a DB as opposed to a defensive lineman to make for a more even fight. And who would blame him? I certainly wouldn’t want to go against, say, Aaron Donald after seeing how he can absolutely manhandle opponents in an altercation.

What would you make the odds for this fight? 🤔 pic.twitter.com/yx8LG7D8bQ

Would actually pay to watch Ramsey vs Hill in the octagon.

Hill was then asked about fighting in games or practice. He says that it’s a waste of time and energy.

“I’m not finna waste my energy when I gotta come back and then cook you the next play. Why would I do that?”

Paul joked that he could arrange for a Hill-Ramsey fight to happen, but for now, fans will have to settle for watching these two superstars duke it out on the football field.