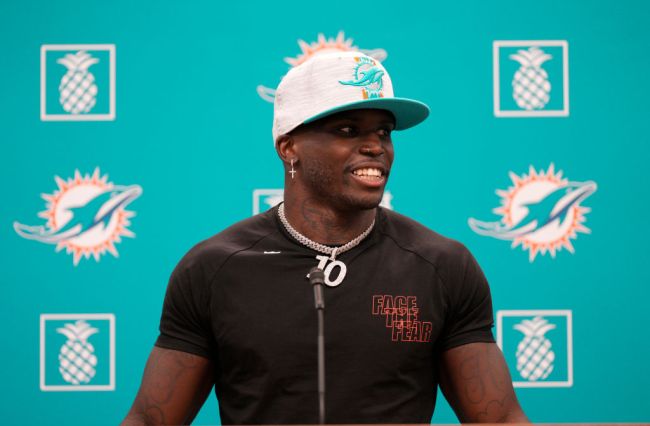 When Tyreek Hill was traded to the Miami Dolphins, it was expected that he was about to become the focal point of an offense that was in need of some help. However, what wasn’t expected is that he wants to be even more involved than that.

Dolphins General Manager Chris Grier told the Palm Beach Post that the first thing Tyreek Hill said to him was that he wants to return punts next season.

Chris Grier: First thing Tyreek Hill said when we traded for him is he wants to return punts. https://t.co/tngt7Cl4z3

I understand Tyreek Hill wanting to contribute to his new team in any way possible and he was absolutely awesome as a returner in his rookie season, but this would be a horrible idea if the Dolphins were to go along with it.

There is more risk for injury on returns than at any other time in a football game. Hill also is also a smaller player at just 5’10” and 185 pounds. He is going to be way too valuable to this Dolphins offense to be used as a punt returner and risk suffering a major injury.

Besides, I’m not even sure that it will be necessary for Hill to take on this role if he wants to take on more responsibility on offense. Coaches are finding more an more ways to scheme their top receivers into touches in the NFL these days.

Mike McDaniel is going to do everything in his power to keep the ball in Tyreek Hill’s hands as much as possible this season. That just shouldn’t include letting him return punts.