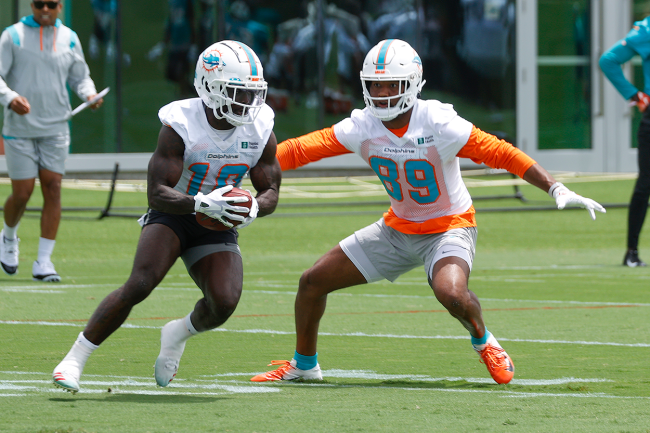 Tyreek Hill has a new start with a new team in 2022, but that doesn’t mean that he isn’t picking up right where he left off. The 28-year-old wide receiver recently showed off his footwork at a youth camp and his feet are wicked fast.

Hill, who was traded from the Chiefs to the Dolphins earlier in the offseason, got paid upon arrival in Miami. Since then, he has made it very clear how he feels about his opportunity to succeed in his new offense. The three-time First-Team All-Pro even went so far as to make a very loud claim about his new quarterback, Tua Tagovailoa, and the similarities to his former quarterback, Patrick Mahomes.

In Tagovailoa’s first year with an opportunity to start in the NFL, the Dolphins did not have a 1,000-yard receiver. Last year, in Tagovailoa’s first full season as QB1, Jalen Waddle barely crossed the 1,000-yard mark. Hill hopes that he will keep the upward trajectory going in 2022 and lead the team as the primary receiver after feeling underutilized in Kansas City.

In the meantime, it does not appear that Hill has lost a step. Literally.

During a recent appearance at a youth camp, the newest Miami pass-catcher was MOVING through the ladder drill. Although he got tripped up about halfway through, the foot speed was ridiculous and he looked to be in incredible shape. He’s jacked.

everyday is an opportunity to get better right ✌🏿 pic.twitter.com/4i9SrzngP0

As one of the twitchiest wide receivers in the NFL, first-year head coach Mike McDaniel has a serious weapon at his disposal right away. After helping to turn Deebo Samuel into what he is in San Francisco, it will be interesting to see what McDaniel can cook up for Hill.