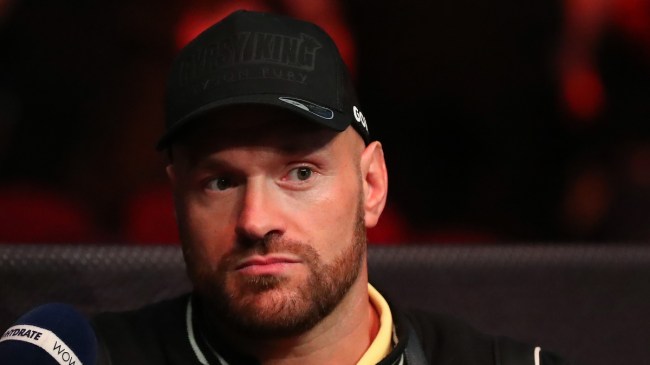 Tyson Fury recently challenged Francis Ngannou to a fight with some bizarre demands. He was even trying to get Mike Tyson involved for some reason.

Ngannou has yet to respond. However, this fight request has Chael Sonnen calling out the Gypsy King.

In fact, Sonnen questions every single aspect of Tyson Fury’s fight demands. After that, the former UFC star calls Fury’s request, “the dumbest idea in sports history,” per MMA Fighting.

Sonnen followed that up with an explanation as to why he thinks Fury is making these bizarre demands. According to MMA Junkie, the former UFC star believes the Gypsy King made these requests to get out of fighting Francis Ngannou. Here is Chael Sonnen’s full explanation.

Those are pretty bold words from Sonnen, though, he’s never been shy from expressing his opinions. As of right now, Tyson Fury has yet to respond to the former UFC fighter. Additionally, it’s unclear what Francis Ngannou makes of this commotion, as he’s still pondering his next move.

Hopefully, some clarity ensues in the coming weeks. Ngannou has been vocal about wanting to box and fight MMA simultaneously. If that’s the case, then maybe one day these two will square off against each other. And who knows, maybe they’ll follow-through with Tyson Fury’s wild fighting rules.