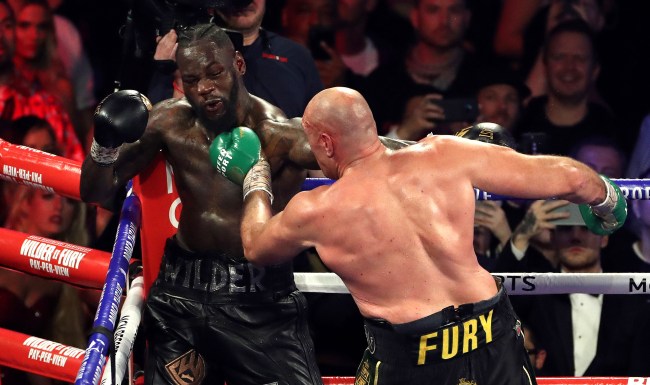 It turns out that Deontay Wilder isn’t the only person spouting wild conspiracy theories about his TKO loss to Tyson Fury.

In addition to blaming the 45-pound costume he wore to the ring and his trainer Mark Breland, who Wilder is reportedly firing and believes could be part of a conspiracy with Tyson Fury’s trainer Sugarhill Steward, there is another theory floating around about Fury’s boxing gloves during the fight.

In a video that has been viewed over 700,000 times as of this writing, Fury’s gloves appear to be extraordinarily floppy – as in, it appears like his fists were actually located inside the wrist area of the gloves rather than all the way in as one would expect them to be.

“Tyson Fury’s gloves are dangling from his hand like a bag,” wrote YouTuber Toronto Peace Mowrey in the caption of the video.

He’s not wrong. Watch the video…

While looking completely unnatural, there is of course, no concrete evidence of any shenanigans on Fury’s part. Not that it stopped many commenters from lobbing accusations Fury’s way.

“Mfs gloves are clearly flapping in the wind. Anyone that can not see this is brain dead.”

“His [fists] are resting in the base of his gloves. Punches have little cushion.”

“:48 not humanly possible, definitely something weird going on, maybe they both stage the trilogy for the money.”

“Thats why he unplugged the locker room camera!”

Not that Fury hasn’t been accused of cheating and/or doctoring his gloves in the past. Because he has.

In October of 2019, Fury’s sparring partner Nicholas Asberry for his first fight with Deontay Wilder, claimed that Fury removed the padding from his gloves, posting a video as what he called evidence.

Fury’s camp naturally denied Asberry’s claim with Fury telling IFL TV, “I’ve heard something about gloves, that I’ve taken padding out of gloves. For who? For Nicholas Asberry?! Please! Have a day off will you! Have a day off and have two off please on Sundays.”

Fury was also accused of cheating by fans during his defeat of Wilder when he threw what they considered to be a “dirty” punch to the back of Wilder’s head – something Wilder has actually been accused of doing in past fights.

Tyson Fury lands a right hand on Deontay Wilder to score a knockdown in round 3. Wilder’s bleeding from the ear #WilderFury2 pic.twitter.com/jH9sm8ybs7

That's definitely a punch to the back of the head

If ever one needed more proof that boxing is back, the fact that people are getting bent out of shape, tossing around conspiracy theories shows that the sport is as healthy as it’s ever been.