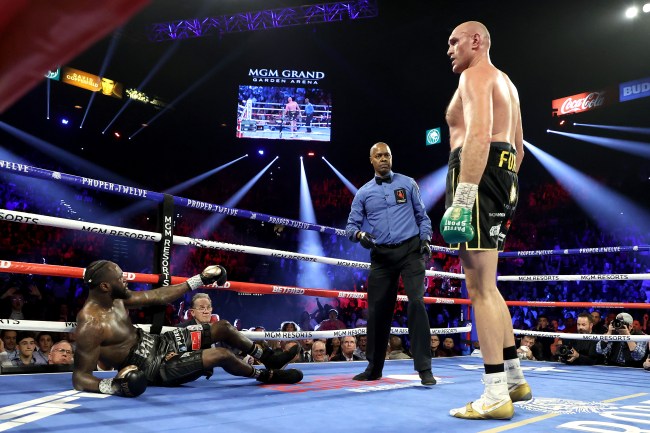 Deontay Wilder got absolutely crushed in his fight against Tyson Fury but he can’t stop making excuses for why he lost on Saturday night.

On Monday afternoon Wilder said he was going to exercise his rematch option because his heavy costume drained his legs before the start of the fight.

Deontay Wilder says a lot of things went wrong leading up to his fight against Tyson Fury, including miscalculating the effect his 40-pound costume would have on his legs. https://t.co/jHTfUnSEm8

There were a lot of things that went wrong leading up to the fight, in the last minutes before the fight, but I accept full responsibility,” . “I paid a severe price because my legs were how they were because of my uniform. My uniform was way too heavy. It was 40-plus pounds. We had it on 10 or 15 minutes before we even walked out and then put the helmet on. That was extra weight, then the ring walk, then going up the stairs. It was like a real workout for my legs. When I took it off, I knew immediately that game has changed.”

Wilder is now questioning whether trainer Mark Breland was influenced by boxer Anthony Dirrell, who was sitting ringside, to throw in the towel. This a serious accusation considering Dirrell is trained by Tyson Fury’s trainer Sugarhill Steward.

It really makes you think about different things. I don’t wanna put negative thoughts in my head or have any kind of conspiracy theories going on, but it makes you think. Somebody that did not something that’s not up to him, and even when they’re instructed not to, they still proceeded on.

And then getting influenced by the opposite team, one of the guys that train with the opposite trainer, you know, it makes you think. He was influenced by [Anthony] Dirrell. They said [Anthony] Dirrell was in back of him screaming, ‘Throw the towel in! We love our champ!’ And, you know, [Anthony] works with ‘Sugar’ as well, the opposite trainer, Tyson’s trainer. [Dirrell] works with him, too. [Breland] said he didn’t hear nothing, but everybody’s saying the same thing. A lot of people that’s around, a lot of people that was in my camp, and if everybody’s hearing it and if my people in the corner can hear him, and Mark said he can’t hear [him], there’s something wrong with that. It’s a lot going on with Mark as well. But, you know, we’re gonna make a big decision by the time I come back from Africa. And we’re gonna go from there.”

Wilder is expected to part ways with Breland for throwing in the towel against his wishes.