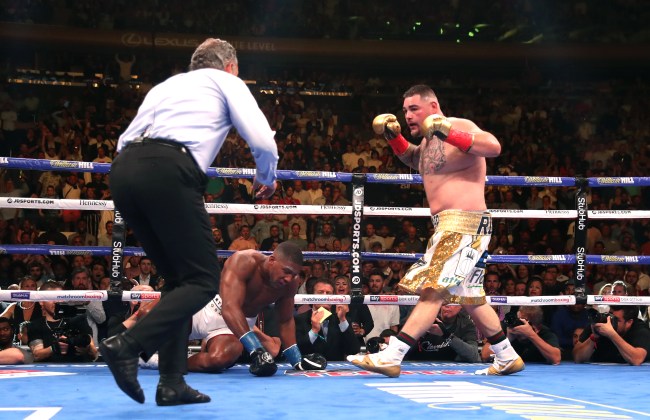 Anthony Joshua fell victim to one of the biggest upsets in boxing history back in June when he lost by TKO in the seventh round to Andy Ruiz Jr. at Madison Square Garden, surrendering all four of his heavyweight titles (IBF, WBA, WBO and IBO) in the process.

Tyson Fury has no sympathy for the former unified world heavyweight champion, and told TMZ on Tuesday that AJ is basically worthless after losing his titles to a “fat guy.” Ouch.

“Everyone’s like, ‘This guy who’s ripped got knocked out by this little fat guy,'” Fury says. “And now, nobody likes him anymore.”

“It kills the rematch because people are not interested in beaten fighters,” Fury says. “That’s what we saw with AJ versus Ruiz. He was this great big man made out of marble, and then he got beaten and knocked out by a fat guy.”

Tyson added, “It’s the cliche of the world: Everybody loves a winner. And, when you’re no longer a winner, you don’t get no more p***y!”

To add insult to injury, Joe Rogan claimed back in June that Anthony Joshua got KO’d in sparring the week of the fight, and got hurt badly. Rogan says he sources told him that Joshua was very “tentative and vulnerable” heading into the Andy Ruiz fight.

Fury recently announced Otto Wallin as his next opponent, with the undefeated British boxer battling the Swede in Las Vegas on September 14. Wilder will fight Luis Ortiz  in a rematch of their own in November.

Looks like we need a Tyson Fury/Andy Ruiz match.