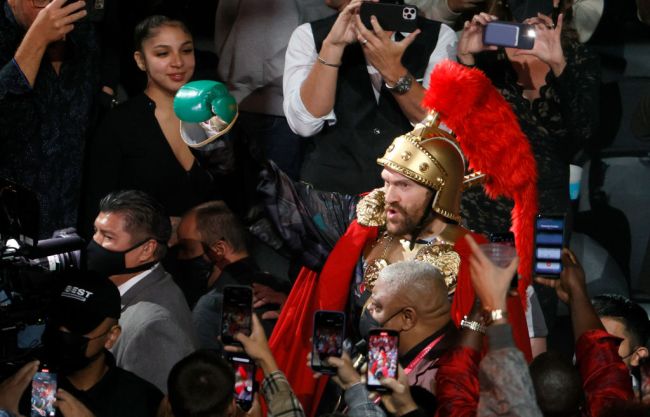 Tyson Fury is simply built different. The 33-year-old WBC heavyweight champion not only went 11 brutal rounds with Deontay Wilder, but he somehow rallied enough to party with Steve Aoki until the early hours of Sunday morning.

Around 10:00 p.m. PT, Fury landed this vicious punch to send Wilder to the mat and retain his belt.

Not long thereafter, he was backstage meeting with fans and the media when Steve Aoki came up to say congratulations. Fury responded by asking if they were going partying to celebrate his win. Aoki said yes.

Around 1:00 a.m., the Gypsy King did exactly that. A shirtless Fury jumped on stage with Aoki at Hakkasan Night Club in Las Vegas and had the place going crazy.

In typical Gypsy King fashion, he led the entire place in a rousing rendition of “The Day The Music Died.” It was his world and everyone around him, including Aoki, was just living in it.

The heavyweight champion of the world wore some HUGE shots and was knocked down more than once.

What a legend. Sing it, Gypsy King!