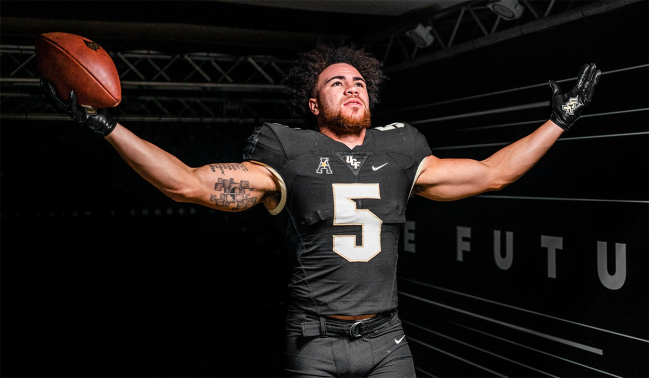 UCF football became one of the first schools to embrace the changing landscape of Name, Image and Likeness during last year’s spring game. Although the current rules on NIL were not in place at the time, the team used players’ Twitter handles on their jerseys instead of a last name plate.

This year, the Knights are taking it up a notch and doing something completely unprecedented.

Every player on the roster will have his last name on the jersey. But they won’t have a number.

Rather than playing the spring game with standard uniforms, UCF is ditching jersey numbers in favor of QR codes. Each player will have a unique, individual QR code on their jersey that is specific to him.

Custom QR codes for every player🤳

When the QR code is scanned, it will link back to that player’s biography page on the UCF athletics website. Once on the specific player’s page, fans can then click out to his social media channels and websites where they can purchase player-branded merchandise.

The decision to replace numbers with codes comes as UCF continues to make its push to stay relevant and ahead of the curve in the new, ever-evolving landscape of Name, Image and Likeness. Even head coach Gus Malzahn will have his own QR code on his coaches’ polo.

Malzahn’s mindset about the entire thing has changed over the course of the last year.

“Last year, we put Twitter handles on our jerseys. I was like, ‘What the heck am I doing?’” he told Sports Illustrated’s Ross Dellenger. “We wanted to be the school that embraced it. At the old traditional schools, there’s a lot of dynamics. Yeah, they’re for it but really, they’re not for it. We are a school that can fully embrace it—the young school, social media. It fits with us.”

UCF wants to get out in front of the NIL era and show players and prospects that the Knights are embracing the change. QR codes are certainly a way to do that, but it will definitely make things a little bit confusing when they all get on the field this weekend.