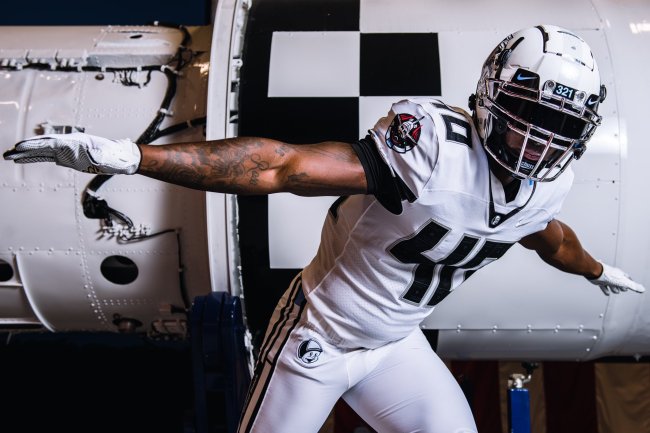 Every year since 2017, the Central Florida football team has worn uniforms that honor the school’s support of the United States space program. Due to the campus’ proximity to the Kennedy Space Center and the Cape Canaveral Air Force Station, the school, its studies, and the space program go hand-in-hand.

In fact, 29% of Kennedy Space Center employees are University of Central Florida alumni. And throughout the years, shuttle launches have led to some pretty incredible photos from the UCF football stadium.

In addition, over the last four years, the football team has worn space uniforms for its “Space Game.” For example, they wore constellation uniforms in 2018 and space technology threads in 2020.

This year, however, they are rolling out their best uniforms yet. In fact, they might be the greatest alternate kits of all-time, across any team in any sport.

This season’s uniforms will honor the 40th anniversary of the space shuttle program and they’re extremely intricate and extremely awesome.

You can find all of the details at ucfspacegame.com, but there are a few in particular that I want to point out.

The jersey numbers are made to look like the Space Shuttle Thermal Protection system at the nose of a shuttle. Titles, that are reflected on the numbers, guard against extreme temperatures.

The black-rimmed collar of the jersey is also shaped in a way that mimics the nose of the space shuttle, while the pants show the rectangular patter from the wings of the shuttle. It’s not something that you would notice unless you were told.

In addition to a few other noteworthy details, the uniforms honor astronauts from UCF and beyond.

On the left shoulder, a patch references the Shuttle Discovery, on which UCF alumnus Nicole Stott rode. On the helmet stripe, it lists more than 100 UCF alumni, faculty and fans who worked on the space shuttle program.

The moment you find out that your name is a part of the @UCF_Football space uniform 😭😭😭
Dreams do come true!! 💛🖤 pic.twitter.com/yJPUD8QDpi

And on the helmet bumper, there is a tribute in remembrance of the tragedies of the Challenger and Columbia shuttles and the brave lives lost. It’s an incredibl

You can find specific images and a list of every last detail on the school’s site. It’s worth checking out because these uniforms are absolutely perfect in every way.

UCF will run out of the tunnel for its annual ‘Space Game’ on Friday, October 22 against Memphis. The game will kickoff at 7:00pm EST and you should tune in, if only for the uniforms.