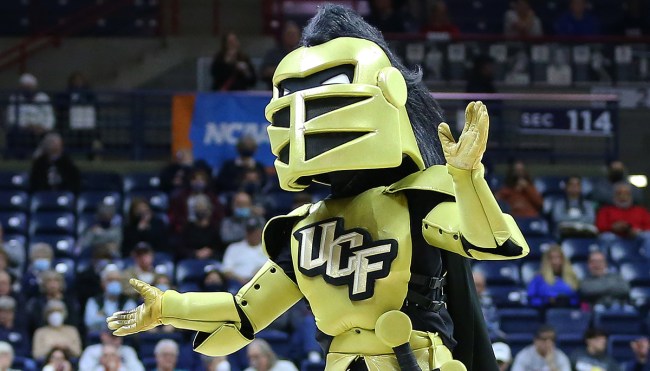 College sports have spawned some absolutely heated rivalries between schools whose intense distaste for each other can usually be traced back to geographic proximity or a series of particularly contentious showdowns.

The key to a good rivalry is a palpable, genuine, and—most importantly—mutual hatred for your mortal foe; you can’t simply just wake up one day and decide you’re going to engage in a blood feud with someone who doesn’t feel the same way.

However, no one told that to former UConn football coach Bob Diaco, who was hellbent on becoming rivals with the University of Central Florida when the Knights joined the AAC in 2013. After UCF spent a couple of years making it very clear the feeling was anything but mutual, Diaco pulled one of the wildest moves in recent memory by commissioning a trophy for the unrequited feud he’d dubbed “The Civil ConFLiCT.”

First day back on campus for #UConnFootball! And just 130 days until the next Civil Conflict with @UCF_Football ! pic.twitter.com/RgOkXiob0T

That decision sparked an incredibly entertaining saga, as UCF left the trophy sitting on the sideline after earning the right to claim it in 2016, and no one seemed to know what happened to it after Diaco was fired following his disastrous stint at the helm in Storrs.

Last year, UCF decided to reignite the rivalry that never was by commissioning a replica of the Civil Conflict trophy that it posted online prior to its showdown with UConn.

Ahead of Monday’s game between the women’s basketball teams representing the two schools in the NCAA Tournament this year, the piece of hardware appeared yet again after UCF posted it to drum up some excitement.

The Huskies got the last laugh after punching their ticket to the Sweet Sixteen following a 52-47 victory, and it looks like things may have come full circle when you consider UConn offered to retain possession of the trophy in the wake of the win.

You can leave that here 😏 https://t.co/j0O6nnGwXt