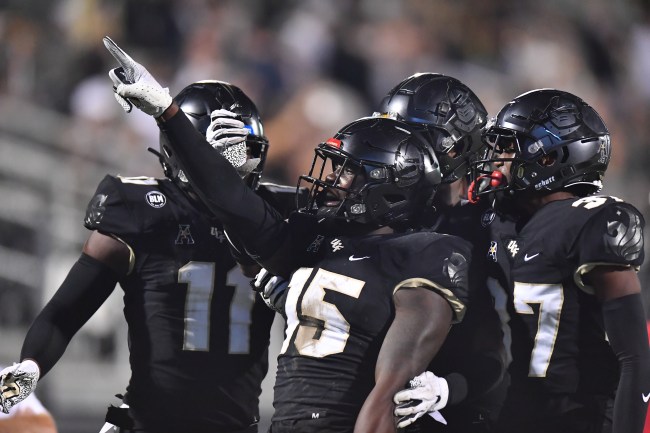 People resist change. We saw this in September 2006 when Facebook rolled out the News Feed and everyone cried Privacy Invasion! for 72 hours before being permanently entranced with who may be boning who.

We saw this in 2018 when Temple football unveiled their social media-themed uniforms for a spring game, and again on Saturday when the University of Central Florida followed suit.

Many within the program praised new UCF @CoachGusMalzahn for fanning the flames of player empowerment and giving into the new age notion that self-worth is directly proportional to one’s social footprint.

“We’ve been saying that the future of college football is right here [at UCF],” @CoachGusMalzahn said afterward. “… This is a new age of personal branding. We’re going to embrace it.”

“Everybody was so excited when he did it,” @_dillongabriel said.

“Gus is big on building our brands and wants to help us set up the next part of our lives,” wide receiver @RyanOKeefe23 said.

Added linebacker @fvo56: “It shows that he cares about our lives after football.”

Not everyone was down with UCF’s clout chase, as football purists across the nation shook their fists and longed for the days when players wore leather helmets and smoked lung darts on the sidelines.

This is so fucking stupid https://t.co/5aFL5e1Umk

Naming your stadium “The Bounce House” and putting @‘s on jerseys. What a corny ass program. https://t.co/KSvOki40SH

This makes me want to commit war crimes. https://t.co/GfdEcgetLY

This is so fucking ugly holy shit https://t.co/c062eQXW8U

I hate my generation https://t.co/JPIlb5HDHF

This is absolutely terrible for the game of football. https://t.co/6yVCqdrB5s

ok this is stupid as fuck https://t.co/cdKQC6Z2my

Dumbest thing I’ve ever seen in my life https://t.co/aeyguqu5U9

Whether you’re down with the social media tomfoolery or not, you cannot deny that UCF is an absolute powerhouse when it comes to marketing its football program.

Now if we can only do something about that 6-4 record from last season.