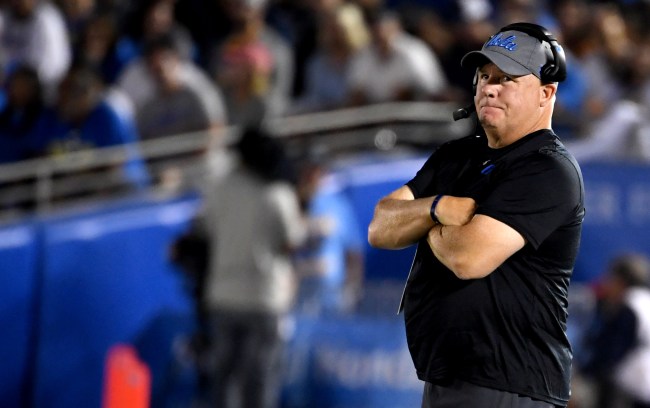 The Chip Kelly era over in Westwood has certainly gotten off to a rocky start. So far, since being hired by UCLA in late 2017, the Bruins have gone a very disappointing 4-14 after starting 0-5 and 1-5 in each of the past two seasons.

In 2018, Kelly was raked over the coals by none other than the father of his team’s quarterback Dorian Thompson-Robinson who went scorched Earth on Twitter, ripping the man DeSean Jackson called a “big time weirdo.”

Robinson’s dad said, among many derogatory things, Kelly’s “years at Oregon was [sic] simply a fluke.”

Now, in 2019, after another horrific start to the season, Chip Kelly is being put up “for sale” in a comical Craigslist ad obviously posted by a very disgruntled Bruins fan.

We are selling a used Chip Kelly in broken condition. This antique might still have some value as a fun Christmas present for your ailing, desperate, and gullible football program. It comes pre-loaded with 100 snarky quotes like “the wishbone was successful too” and “we’re just trying to have a good Monday.”

However, after nearly two years, we haven’t gotten the most important parts of it to work. Its previous owners were also dissatisfied with it and we thought it’d need a good home and some TLC. It turns out that it is broken beyond repair, so we are selling AS-IS and for PARTS ONLY. We imagine you can find some workable pieces in here if you are looking for 5-tight-end play designs and are in need of tearing down your roster to its bones.

While it is not functional, it could make a nice set piece. Putting this on your coffee table for decoration is sure to spark memories of elite offenses and fun playcalls. Do note, though, that although it comes with preloaded quotes, its functionality is so broken that it will refuse to directly answer any of your questions and will almost certainly get dangerously close to insulting you if you try.

We are selling this for $9M obo. We recognize this is a steep price, but memories and status are priceless, even if functionality is shot.

That is going to be one tough sale right there.

Especially since Dorian Thompson-Robinson’s dad Michael is showing no sign of slowing down on the Twitter front, retweeting articles this week titled “Oregon State is No Longer the Worst Team in the Pac-12” and “Why Does UCLA’s Jerry Azzinaro Still Have a Job?”