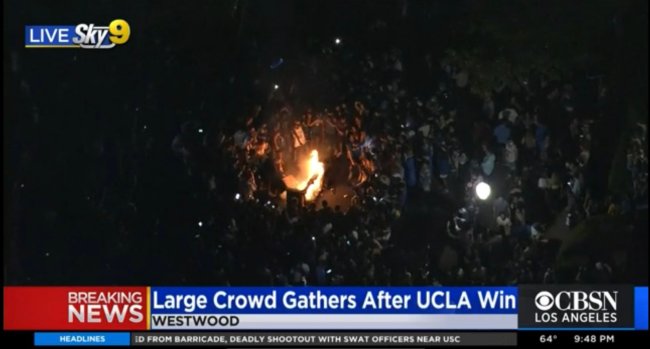 UCLA basketball reached its first Final Four since 2008 on Tuesday night and students took to the streets to celebrate. The Bruins outlasted No. 1 seed Michigan in the Elite Eight after losing its last four games prior to March Madness and barely making the tournament. Second-year head coach Mick Cronin’s team is led by Kentucky transfer guard Johnny Juzang, who scored 28 of the team’s 51 total points. The second-highest scorers in the game both had 11.

Mick Cronin leading the UCLA chant with his family in the stands ✊@UCLAMBB #MarchMadness #FinalFour pic.twitter.com/11MNOwUXTo

As the school pulled the upset victory around 9:10 p.m. in Los Angeles, students flooded the streets in Westwood. Mattresses were set on fire in the streets as the masses gathered in celebration.

The party is on in Westwood after UCLA makes its first Final Four in 13 years pic.twitter.com/yTXSxWqHvM

Not soon after the first fire crew arrived, fireworks began to pop off in the area and the crowd of students only continued to grow. As many as three LAPD helicopters were on the scene, but the party raged on.

UCLA students are LIT in the streets pic.twitter.com/KTXOaq7fdx

UCLA’s crosstown rivals USC were also in the elite eight, but the Trojans were dominated by the tournament’s top seed Gonzaga and sent home. The Bruin faithful did not let their Los Angeles counterparts live it down and chanted in full voice “F**K SC!” Not long thereafter, another mattress was on fire and students were adding whatever they could to keep it going.

The second fire grew to a pretty significant size, but eventually the fire department stepped in and shut it down.

Fires have been put out in Westwood pic.twitter.com/bbckvjUJNX

The police scanner was very active and as many as 20 Metro Department units were sent to the scene. Los Angeles, and California as a whole, remain under some of the strictest COVID-19 regulations in the country so a gathering of such significance was dispersed as quickly as possible.

Radio chatter from the TAC channel re the Westwood incident ⬇️ pic.twitter.com/E8PUOwECuy

Some of the images from the evening tell the story from three different perspectives.

UCLA students celebrate the men's basketball team's win over Michigan to advance to the #FinalFour pic.twitter.com/kbjiLDT2fc

If this was the celebration after UCLA reached the Final Four, imagine what it will look like in Westwood if the Bruins beat Gonzaga to compete for the National Champion, or if they win it all. Mayhem.