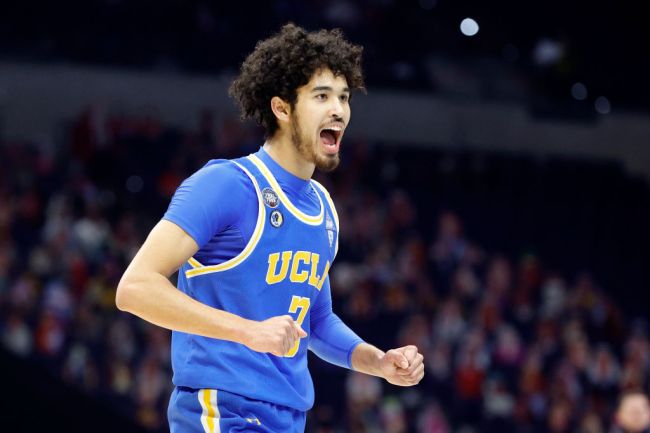 UCLA basketball’s Johnny Juzang thought he was going downstairs in the team hotel for a routine food pick-up and was meat with a big surprise. The Bruins’ sophomore guard has been in the NCAA Tournament “bubble” for about three weeks and more than likely has not seen his family in about a month— since the start of his conference tournament.

This entire postseason has been handcuffed with strict COVID-19 protocols, and as Jon Rothstein would say, you have to “stay positive, test negative.” And on top of being away from his partents, Juzang has not seen his brother since July or August. He has been in Vietnam “forever.”

Thus, it was a huge surprise when his family was there to drop the food off. His brother had flown 25 hours to get to UCLA’s game against Gonzaga in the Final Four.

.@JohnnyJuzang's brother flew in from Vietnam to surprise him at the #FinalFour ❤️

It was one of those moments that March Madness is all about and it comes before the biggest game of Juzang’s life. He transferred closer to home in Los Angeles after one year with Kentucky and averages 15.5 points per game.

During the Bruins’ five game run to the Final Four, Juzang had three games with 20+ points and was a crucial component. He and his team beat an 11-seed Michigan State in the First Four game after sitting firmly on the bubble. They went 14-7 during the shortened regular season in a conference that wasn’t considered to be competitive.

Juzang dropped a game-high 29 points in a heartbreaking last-second overtime lost. Head coach Mark Few said that he went from being a shooter with the Wildcats to player with the Bruins. He kept his impressive streak of scoring up in the semifinals but the game just didn’t didn’t fall his way. Juzang joined an exclusive club with his performance.

Juzang in some elite @UCLAMBB company 👏

It was an impressive finish to the year for UCLA and Cronin’s second year at the helm ended better than expected. They really could have won the game.