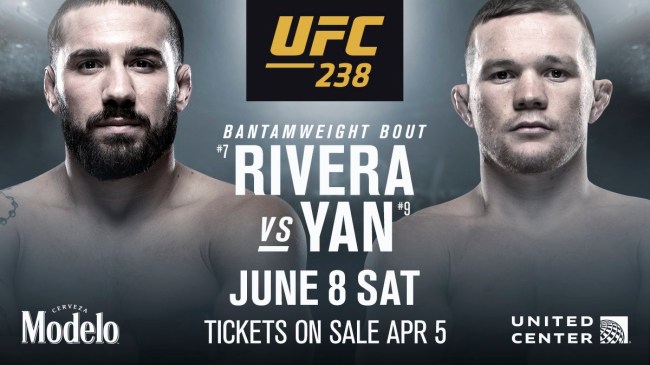 Never heard of Russian bantamweight Petr “No Mercy” Yan? Well, you probably never heard of Andy Ruiz before last week either, and look at the “Destroyer” now. He’s only the heavyweight champion of the freaking world.

That’s kind of how it goes in combat sports. Contenders — real contenders — rise to the top fast, so it’s time for a bit of a deep dive on Yan, a mixed martial artist who fights Jimmie Rivera this Saturday, June 8, on the UFC 238 Pay Per View main card on ESPN+ because this just might be the moment that he transitions from talented prospect to legit contender.

Just 26 years old and less than a year into his run inside the UFC, Yan has already recorded four wins inside the Octagon since debuting in June 2018. Four wins in less than 12 months already put Yan in rare territory, and a fifth would tremendously boost his profile on the MMA scene.

See, unlike his previous bouts, which have taken place mainly on prelim cards, or in obscure locations like Singapore, Moscow, and Prague, Yan’s fight against Rivera is booked as the lead-in fight to “The People’s Main Event” between Donald “Cowboy” Cerrone and Tony “El Cucuy” Ferguson, which mean fans will be in place and ready to watch by the time Yan walks into the Octagon at the United Center.

Basically, It’s like being the opening band for Black Sabbath when you know you’re going to go on to be Van Halen. Perhaps that reference dates me a bit …

Regardless, the UFC is giving Yan a huge opportunity to shine on the UFC 238 PPV main card on ESPN+. Matchmakers Sean Shelby and Mick Maynard, along with UFC president Dana White, have booked a massive night of bantamweight action and are dangling the keys to the Porsche right in front of Yan’s eyes, but first, he needs to pass his driver’s test. Jimmie “El Terror” Rivera is the personification of the toughest test of Yan’s career.

Up until this point, Yan has stormed through the competition, climbing all the way up to the ninth ranking in the bantamweight division with stalking, hard-hitting style that meshes heavy-handed boxing with exceptional footwork and cage cutting techniques to hunt opponents down.

Born in Russia, and of mixed Chinese and Russian ancestry, Yan trains out of Tiger Muay Thai in Phuket, Thailand, a regular stomping ground for dozens of high-level MMA fighters.

Training alongside top-echelon athletes Yan quickly ascended up the professional tiers, landing in the UFC last year. Since then, he’s been on an absolute tear, knocking guys out, dragging them into deep waters, and even forcing dudes to quit on the stool, which almost never happens in MMA.

Yan’s quickly become a leader of a new crop of bantamweights, guys who will take the division into the next decade, but before he can cement his place in the top five and start calling for title shots, he’ll need to dispatch of Rivera, who enters the UFC 238 PPV main card on ESPN+ coming off a loss.

The whole scenario has been perfectly planned to help elevate Yan’s profile, but then again, that’s also another potential trapping of the fight game. Just look at Anthony Joshua’s fight last week, his long-heralded American debut against a huge underdog that went all sorts of south.

Still, the oddsmakers see Yan as a serious favorite at UFC 238, listing him at -375. Of all the male competitors at UFC 238, Yan is actually the biggest favorite, by a lot, and he’ll need to keep all of that out of his mind once he steps inside the Octagon. He’ll also need to stay inside Rivera’s kicking range and keep the pressure on because that’s his game and it’s a perfect disruption of “El Terror’s” karate-based style.

It will be interesting to see if Yan can make this big step up on June 8. Having already called out a number of top contenders, he’s right on the cusp of stardom. And while he’s still a fight or two away from a title shot, this fight against Rivera on the UFC 238 PPV main card on ESPN+ will be the biggest indicator of where his career goes as we approach a new decade.