UFC 242 Trivia: These Stats and Factoids Will Make You the Hit of Any UFC Watch Party 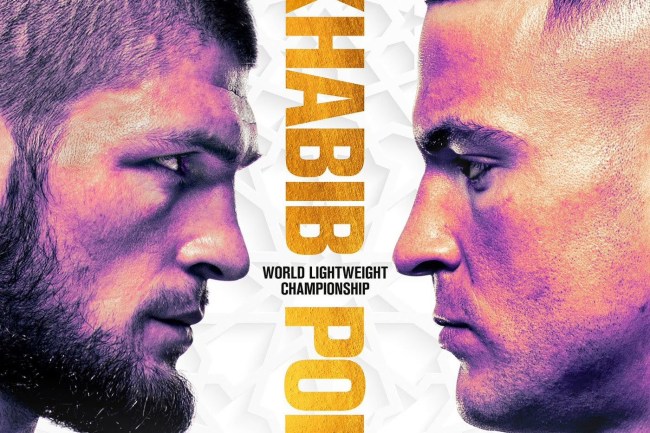 No one likes to watch a fight with a loudmouth know-it-all, but there’s definitely some cache to having a few tasty trivia nuggets up your sleeve.

Having a few good stats ready to go come fight night (in this case it’s fight day, since the main card starts at 11 a.m. PST / 2 p.m. EST) is never a bad thing. You can casually insert them into the larger conversation, something to the tune of “you know, if Khabib beats Poirier in the UFC 242 Pay Per View main event, he’ll tie Tony Ferguson for the longest active win streak in the UFC with 12.”

Your friends, and the strangers at the bar watching the UFC 242 Pay Per View main card on ESPN+, will be impressed, since most of them will only know that Khabib is making his return to the Octagon 11 months after he incited a wild brawl at the T-Mobile Arena in Las Vegas, moments after he cranked the hell out of Conor McGregor’s neck.

Here’s an even tastier nugget: Khabib is one of only three fighters to start their UFC careers 11-0. The other two? Anderson Silva and Royce Gracie. Now that’s some serious company to keep.

Busting out some trivia like that will definitely make you sound like a well-versed and knowledgeable fight fan, even if it’s your first time ordering a UFC PPV. And, if that’s not enough, just remember that UFC lightweight champion Khabib “The Eagle” Nurmagomedov is a total wrestling machine and he once recorded 21 takedowns in a single fight, which still stands as a UFC record.

Check out every takedown Khabib has ever recorded in the Octagon:

Facing Khabib in the UFC 242 PPV main event is Dustin “The Diamond” Poirier, who is fighting in his seventh UFC main event.

Little known fact about Dustin Poirier: only one other fighter in UFC history has taken a longer path to his first title shot. That fighter: UFC Hall of Famer, Michael Bisping, who won the undisputed middleweight title in his twenty-sixth UFC bout. For Poirier, the current UFC interim lightweight champion, this will be his twenty-third UFC appearance.

The winner of ten fight night bonuses, including in each of his last four fights, Poirier is a veritable champ killer. Looking at his last four UFC bouts, he’s beaten featherweight champion, Max Holloway, along with finishes of Eddie Alvarez, Justin Gaethje, and Anthony Pettis, all former world champions in the UFC or other major MMA organizations.

Another fun little factoid to break out at your UFC 242 Pay Per View watch party: the last time the UFC held a major PPV event in Abu Dhabi (UFC 112) a heavily favored lightweight champion (B.J. Penn) was upset by a gritty challenger (Frankie Edgar). So, could lightning strike twice in the United Arab Emirates? Can Dustin Poirier find a way to continue this upset trend in the Middle East? Of course you need to watch the UFC 242 main event on ESPN+ to find out.

Looking at the UFC 242 co-main event, there’s a few sweet trivia bits to toss out there, like, did you know that Edson Barboza, the highlight reel kickboxer who delivered one of the most stunning knockouts in UFC history is also the lightweight division leader with seven KOs?

In addition to his picture perfect flying knee KO of Beneil Dariush in 2017, Barboza is also the only fighter in UFC history to earn stoppages via head kick, body kick, and leg kick. Ooo … thems be some nasty, nasty kicks.

And facing Barboza? Well, that would be Paul Felder, the UFC’s all-time leader in stoppages via elbow strikes. He’s done that three times.

No doubt Felder has some wicked and vicious elbows, but what he’s most known for is his spinning backfist KO of Danny Castillo back at UFC 182. Apparently, that’s one of only six spinning backfist knockous in UFC history, although, six feels like a bit of a stretch.

Hmm. Who else is on the UFC 242 Pay Per View main card on ESPN+? How about, Islam Makhachev, who is actually the least hit fighter in UFC history, absorbing just .83 significant strikes per minute. Or what about Curtis “Razor” Blaydes, the UFC’s all-time leader in takedowns in the heavyweight division with 40?

Yep. Both of them will be throwing down on Saturday, September 7.

And who else is out there? Oh, I don’t know? Mairbek Taisumov?

Taisumov kicks off the UFC 242 PPV when he faces Diego Ferreira on the main card on ESPN+. Stunning stat for Taisumov — he’s 6-1 during his UFC run, which included a stretch where he recorded five-straight knockouts, a UFC lightweight record.

So there you have it; a few tasty trivia nugs to dish out on fight day. Get your crib sheet ready, and fire up the ESPN+ app because this UFC 242 PPV main card is gonna be a barnburner.