UFC 244 Fight Week: These Finishes Will Get You Stoked for UFC 244 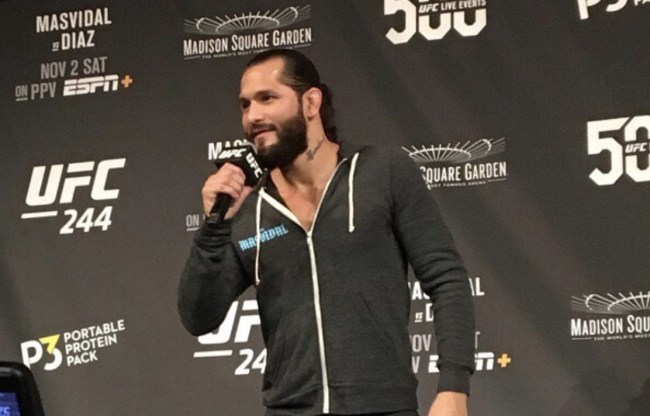 UFC 244 has finally arrived. And, if anyone is still on the fence about shelling out a few bones to watch the biggest fight of 2019 — that’s the Nate Diaz vs. Jorge Masvidal BMF title fight — here’s a little more fuel to stoke the fire that is your burning love for knockouts and submissions.

With a collection of fighters known for devastating and crafty finishes, the UFC 244 Pay Per View main card on ESPN+, the 500th event in UFC history, is a huge deal, not only in combat sports, but in the entire sports landscape. It’s something new, novel, and exciting, so here’s a rundown of who is on the card, and what they do best.

The Fastest Knockout in UFC History

Jorge Masvidal not only landed the 2019 Knockout of the Year when he completely obliterated Ben Askren in just five seconds, he also made the best sales pitch any fighter can ever make, needing a single flying knee (and a few followup punches on the ground) to stake his claim as one of the baddest fighters to ever step foot inside the Octagon.

Already a street fighting legend as part of Kimbo Slice’s Miami backyard brawling crew, Masvidal has exponentially elevated his profile as a result of this monster KO.

There have been a lot of knockouts in UFC history, but never one quite like this.

Nate Diaz is Not Surprised

Nate Diaz has been in the UFC for so long that it’s impossible to pick just one highlight to represent one of the most impactful and impressive careers in UFC history.

The owner of a record eight Fight of the Night bonuses, Diaz has collected 15 performance bonuses overall, and his finishing ability speaks volumes for the diversity of his mixed martial arts game. Diaz truly is one of those fighters who can do damage anywhere the fight goes.

Still, it’s his rear-naked choke of Conor McGregor at UFC 196 that remains Diaz’ most notorious career highlight, so enjoy the clip below to see what Nate Diaz is all about:

The UFC 244 BMF title fight on ESPN+ is such a big deal that it’s easy to forget that there’s an entire card of badass finishers setting the table for Masvidal and Diaz. But co-main event fighter Kelvin Gastelum has a lengthy resume of fantastic finishes.

Gastelum, who takes on middleweight debutante Darren Till on the UFC 244 PPV main card on ESPN+, has seven fight night bonuses to his name and has already taken out three former UFC champions.

Wonderboy: What is the Secret of Your Power?

Stephen “Wonderboy” Thompson, who takes on Vicente Luque on the UFC 244 PPV on ESPN+, is no stranger to jaw dropping finishes.

The karate specialist and kickboxing champion has two head kick knockouts inside the Octagon, including a wild spinning hook kick that dazed and phazed Jake Ellenberger back in 2015.

Thompson, who is currently ranked seventh in the UFC’s welterweight division and fought for the title on two occasions, is coming off the first knockout loss of his MMA career, so it will be very interesting to see how “Wonderboy” rebounds.

He has a very tough test in Luque, but whenever Thompson steps foot inside the Octagon, finishes like this are always within the realm of possibility:

My Balls Was Hot, and so is This Knockout

Derrick “The Black Beast” Lewis is the epitome of a knockout artist.

With 10 KOs inside the Octagon since joining the UFC in 2014, Lewis has not only collected six fight-night bonuses, but he’s also gone viral, in one of the funniest moments in UFC history.

Talking with Joe Rogan following his come-from-behind KO win over Alexander Volkov at UFC 229, Lewis stood in the center of the Octagon with his fight shorts off, explaining that his undercarriage was overheated.

The viral moment, and the knockout, propelled Lewis to a title shot last November at Madison Square Garden. He fell short to Daniel Cormier in that bid, but he has a chance to right the ship and earn his first victory at the most famous arena in sports on the UFC 244 PPV main card on ESPN+.

Here’s a look at what Derrick Lewis does best:

One of the most creative finishers we’ve seen inside the Octagon in quite some time, light heavyweight Johnny Walker has a lot on the line at UFC 244.

With a potential title shot against Jon Jones looming, Walker can solidify his claim as the division’s next challenger if he can land another impressive finish.

To be fair, Rozenstruik has only competed inside the Octagon twice (both knockout finishes) and there are so many huge names on the UFC 244 card that it’s tough to put the spotlight on every single athlete competing at Madison Square Garden on November 2. However, the undefeated Rozenstruik, who takes on former UFC heavyweight champion Andrei Arlovski, is being touted by many as a potential future player at heavyweight.

With a jab like this, who can deny that he has the power to make waves in the division:

Sure, the back-and-forth wars are always worth tuning in for, but, in the end, it’s the finishes that keep us coming back for more. Fortunately, UFC 244 is loaded with knockout artists and submission specialists.

And while there can only be one UFC BMF champion crowned on November 2, the UFC 244 card is stacked with men and women who can end the fight at any time, with some of the most impressive techniques in mixed martial arts.