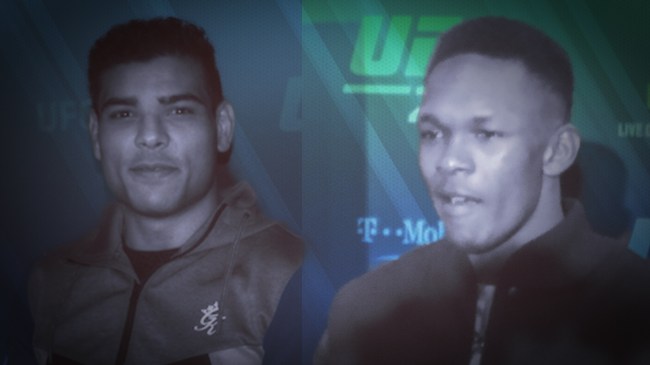 Reality check. Hyperbole gets thrown around in the fight game … constantly.

Every week we hear about the biggest fight of all time, the best fight ever, and the craziest knockout you’ve ever seen. Usually, things aren’t quite as they’re made out to be; however, on Saturday, September 26 (7 p.m. PST / 10 p.m. EST), when world champion Israel “Stylebender” Adesanya puts his belt on the line against challenger Paulo “The Eraser” Costa in the UFC 253 main event, it will, no doubt be the biggest grudge match the middleweight division has seen in a decade.

All the action goes down live on Pay Per View on ESPN+.

Looking at the history of the UFC middleweight division, there is no question that the long-standing rivalry between legendary champion Anderson “The Spider” Silva (who by many accounts is considered the greatest MMA fighter of all time) and Chael Sonnen that dominated the 185-pound weight class for two years is considered the most heated, bad blood feud ever. But when Israel Adesanya steps into the Octagon to face Paulo Costa at UFC 253, it’s quite possible that “Stylebender” and “The Eraser” will give the aforementioned Silva and Sonnen a run for their money.

It’s tough to make comparisons like this, especially in regards to Sonnen, who is quite possibly the greatest trash talker in the history of mixed martial arts (there I go with the hyperbole again). Despite losing to Silva twice, Sonnen never admitted defeat while insulting the entire nation of Brazil. It really was a piece of fight hype brilliance.

By simply stating “Anderson Silva, you absolutely suck,” to Joe Rogan during a post fight interview, Chael Sonnen created a rivalry that has only been matched by the likes of Jon Jones vs. Daniel Cormier and Conor McGregor vs. Khabib Nurmagomedov. But Adesanya and Costa have a chance to enter that space at UFC 253. After all, they’ve already been going at it for quite some time.

Even before he became the most entertaining striker in the UFC, known for his matrix-style maneuvers and brain-rattling knockouts, Adesanya already had Costa on his radar. As far back as July 2018, “Stylebender,” who was then making his first UFC headlining appearance, began calling for a fight against “The Eraser,” who was set to fight the following night at UFC 226. The idea of these two undefeated middleweights clashing inside the Octagon felt like a real possibility, and for two years the MMA world has been clamoring for this fight.

Taunting Costa’s chiseled physique, accusing “The Eraser” of chemically enhancing his performance, Adesanya started to lay the foundation for the rivalry. Fifteen months later, when Adesanya unified the middleweight title, becoming the division’s undisputed champion at a massive stadium show in Melbourne, Australia, there was Costa, sitting cageside, barking for his chance to throw hands with the newly minted champ.

During his celebratory speech, Adesanya called “The Eraser” out, although instead of referencing Costa by name, he referred to the challenger as an “overly inflated balloon animal” and a “Ricky Martin wannabe.”

Fast forward to March 2020, when Adesanya made his first title defense at UFC 248. Again, Costa was cageside, although this time, “The Eraser” had to be escorted from the arena after attempting to hop a barrier and storm the cage.

Honestly, this sort of behavior really isn’t that shocking in mixed martial arts, but Costa has never softened his stance on wanting to put hands on Adesanya. And after suffering such a slew of insults, who can blame him?

While Adesanya has skyrocketed to international fame by winning the UFC title, Costa has had his career stalled due to injury. But if we take a look at the very inexact science of MMA math, it’s quite possible that “The Eraser” may just, well, erase Adesanya’s title run at UFC 253 with the use of his sheer power, size, and durability.

Recalling his fight against Yoel Romero at UFC 241, Costa went punch-for-punch against the Cuban wrestler, withstanding immense damage to earn the unanimous decision win. Costa showed brute force and immense heart in that fight, clubbing Romero with dozens and dozens of fists, pressing forward like a battering ram intent on complete destruction. It was total annihilation time.

Conversely, Adesanya’s bout against Romero was a slow and methodical performance, which may just be another way to say it was boring. That wasn’t necessarily Adesanya’s fault, but the champ sat back and did his exquisite counter-striking thing, which didn’t necessarily result in too much action.

That likely won’t be the case in the UFC 253 PPV main event on ESPN+, as Costa will push the pace and pressure forward. The bad blood has already boiled over, and on Saturday, September 26, Israel Adesanya and Paulo Costa will empty their tanks and leave it all out there, in the Octagon.