UFC 276 Stream – How To Watch Adesanya vs Cannonier Online 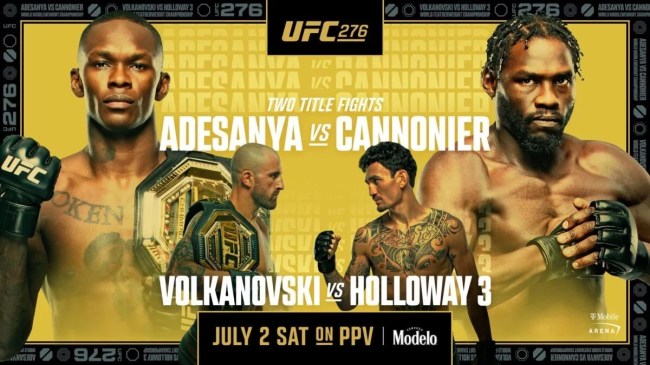 Folks, the best UFC fight of the year is going down tonight. If you’re looking to watch main card, the only place to watch a UFC 276 stream is via PPV on ESPN+.

Not going to lie, I’m stoked to celebrate 4th of July weekend with a monster UFC card. Tonight at UFC 276, The Last Stylebender Israel Adesanya will square off against Jared Cannonier, one of the UFC’s best middleweights. Adesanya is defending his impressive 22-1 record. He’s electric in the Octagon – a swift striker that’s tough for his opponent to read.  In Robbie Lawler’s own words to BroBible earlier this week about Izzy, his teammate:

“He’s really dangerous. Long, good stand up. Good feint. He does a lot of stuff really well, and he comes to fight. He’s a technician out there, and he’s a finisher. So anybody who goes out there looking to finish, he’s definitely a high level striker and puts on exciting fights.”

The main event isn’t the only fireworks on the card. Live from Las Vegas, UFC 276 features some of the UFC’s brightest about stars. For example, Alexander Volkanovski vs. Max Holloway in a rematch for the UFC Featherweight title, Sean Strickland vs Alex Pereira, and Pedro Munhoz vs. Sean O’Malley and his two watches (“neither of them are right”).

The only place to watch a UFC 276 stream is ESPN+.

There are two bundle packages for each situation:

There’s also an option to sign up for premium Hulu without the ads for $19.99/month.

Grab some buddies and buy the fight – it’s going to be epic.

Be safe and have fun this weekend!