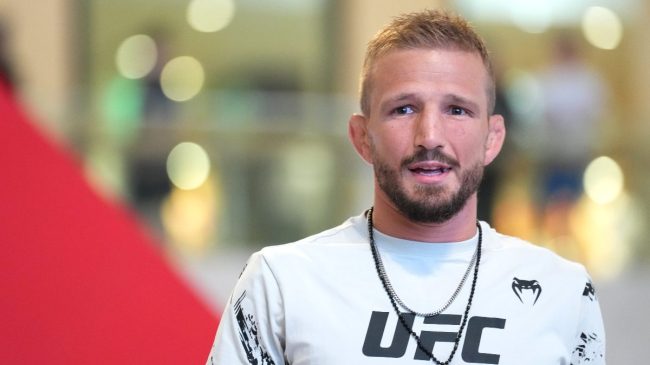 UFC 280 is right around the corner and it has everyone excited for what’s to come. Aljamain Sterling is set to defend his title against TJ Dillashaw in what should be an electric Bantamweight bout. However, Dillashaw was savagely trolled during a face-off with his opponent, as fight fans reminded him of his illegal substance suspension.

It was a sight to behold. As the two Bantamweight fighters faced off ahead of UFC 280, fight fans made sure to let Dillashaw hear them. “EPO” chants were echoed through the venue, putting TJ Dillashaw’s suspension on blast.

the crowd was chanting “EPO” during the Aljamain Sterling and TJ Dillashaw faceoff #UFC280 @funkmasterMMA pic.twitter.com/UwBwLa1Z1x

The former champion lost a ton of respect from fans and other fighters after getting caught red-handed with a performance enhancer. According to Forbes, an EPO is a synthetic hormone that is “used to stimulate the body’s production of red blood cells. It increases oxygen transport and aerobic power in the body. It is classified with Peptide Hormones, Growth Factors, Related Substances, and Mimetics.”

Essentially, Dillashaw was able to increase endurance and not tire so easily. That’s a massive advantage in the fight game. Especially when someone has to fight for five rounds in a UFC championship bout.

All of that is behind TJ Dillashaw now, but fight fans aren’t letting him forget. It’ll be interesting to see how he stacks up against Aljamain Sterling, who has been on a roll as the Bantamweight champion. UFC 280 has massive potential to be the best card of the year. Especially with these two going at it as the co-main event.