UFC On ESPN Plus 36 – How To Stream Covington vs. Woodley 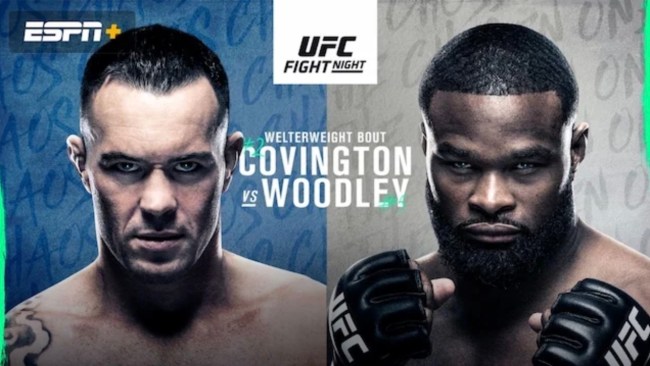 It’s a Saturday night in September and the sports calendar is in full swing. I can’t remember a weekend ever in my life where there were so many sports going on at the same time; it’s impossible to keep track. Thanks to the all-around wackiness of 2020, we have NBA playoffs, NHL, MLB, college football, PGA, NASCAR, and a UFC Fight Night that could easily be a pay-per-view card.

I’m hyped up for UFC On ESPN Plus 36, live from the UFC Apex in Las Vegas. It’s a beautiful night to chill out on the couch and stream UFC on ESPN Plus.

There are some awesome storylines going into the fight – Can Tyron Woodley upset welterweight loudmouth Colby Covington? What’s Donald “Cowboy” Cerrone going to look like in his return to the UFC Octagon after barely lasting 40 seconds against Conor McGregor? Chimaev vs Meerschaert promises to be a middleweight brawl. And how will fan-favorite Mackenzie Dern fare against Randa Markos?

You get the point. It’s going to be an awesome fight night.

How To Stream UFC On ESPN Plus 36

It’s really easy to tune-in for UFC Vegas 11 tonight on ESPN+. All you have to do is subscribe to ESPN+ at ESPN.com for unrivaled UFC action. Once you’re logged into your account, you can then watch tonight’s fight via the app on a number of devices, including your smart TV. You can also watch stream the UFC fight via the following:

You can ALSO grab the Disney+ bundle, which includes ESPN+ and Hulu. And while you’re at it, don’t forget to buy next week’s UFC 253 PPV, available exclusively on ESPN+.

If you’re wondering, what is ESPN+?

Have we mentioned that ESPN+ is the ideal streaming service for those who claim to be an MMA junkie? Take a look at what a subscription gets you.