UFC Fight Night Denmark Stream: How To Watch On ESPN Plus (ESPN+) 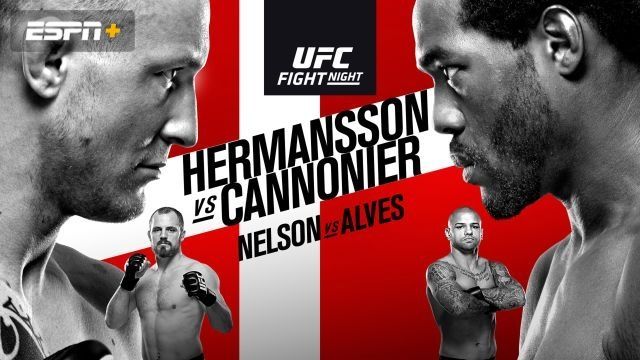 The main event is Jack Hermansson vs. Jared Cannonier in middleweight. Cannonier started his UFC career at heavyweight in 2015 before dropping weight to be a serious contender at middleweight. It’s a pretty cool story: In 2009, Cannonier lived in Anchorage, Alaska and worked for the FFA on air traffic control equipment. He weighed more than 300 pounds. He started getting gritty with his training, as ESPN recalls:

Cannonier’s first foray into the world of mixed martial arts was through the Army’s combatives training course. He was discharged from the Army three years into his service due to a positive drug test for marijuana.

Even as he searched for his next step and began working for the FAA to support his family, Cannonier knew he wanted to break into the world of MMA. He found a Brazilian jiu-jitsu gym in Anchorage and took his first professional fight in Fairbanks, Alaska, in 2011.

Cannonier has dubbed himself “”The Killa Gorilla” and he’s now fighting at 185 pounds as an underdog against a powerful Jack Hermansson. Incredibly, he beat Anderson Silva back in May at UFC 237.

For those of us in North America, it’s going to be an awesome mid-day UFC bout. Reminder that the only place to watch UFC Fight Night 160 live from Denmark is on ESPN Plus. ESPN+ costs just $4.99/month or $49.99/year and has a ton of awesome features for UFC fans, in addition to events *practically* every Saturday night.

A few reasons why ESPN Plus rules for UFC fans: