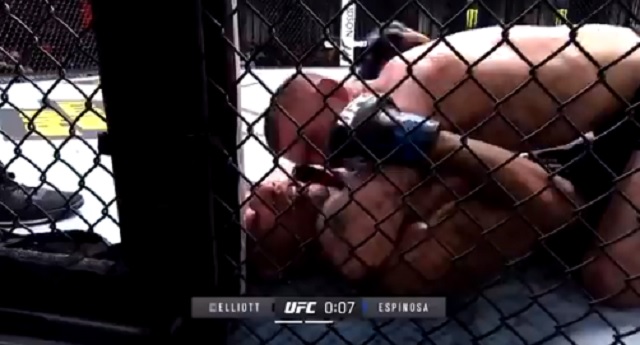 There seems to be a history between former teammates Tim Elliott and Jordan Espinosa.

During their fight at UFC 259, the two fighters held a bizarre conversation.

Elliott, who was in the top position throwing punches at Espinosa, began yelling “I heard you choked a girl in 2018, little woman beater, little f***ing woman beater.”

Espinosa responded “You don’t know the whole story,” to which Elliott replied, “I know enough.”.

Well, this was interesting. pic.twitter.com/NvhpmBtIJa

Update This was Elliott’s explanation of his “woman beater” comment to Espinoza.

“I didn’t say that for anybody else to hear,” he explained. “Because I don’t know the whole story. I was messaged on Facebook, by … I don’t want to name names, but it was a long message with some pictures and Snapchats, back and forth between Jordan Espinosa and another girl, a picture of her choke marks on her neck. I don’t know the whole story but it wasn’t something I wanted the whole world to hear. It wasn’t my … It was supposed to be between him and I.”

Tim Elliott explains why he was saying what he said to Jordan Espinosa and the messages & photos he was receiving #UFC259 pic.twitter.com/Rt7OWeh4R1