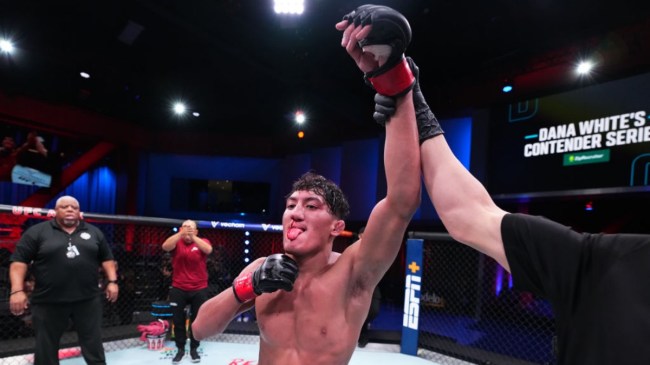 UFC fans may have been introduced to the organization’s next young star on Tuesday night.

Raul Rosas Jr competed on this past week’s Tuesday Night Contender Series card and impressed the audience watching on ESPN+. More importantly, he impressed Dana Whit enough to give him a UFC contract. At just 17 years old, the featherweight is the youngest fighter the UFC has ever signed.

However, he wasn’t the only one that had to sign his first UFC contract. Rosas Jr revealed to TMZ today that he had to have his parents sign the contract.

17-year-old Raul Rosas Jr. just became the youngest UFC fighter EVER … but he's so young, he needed his parents to sign his contract. https://t.co/id4qbxn3Kl

My parents got to sign too because I’m a minor. So parental guardians got to be on there, too.

With Rosas Jr’s 18th birthday coming up in a couple of weeks, this will likely be the last time he ever has to get his parents to sign a permission slip for him.

The fighter showed plenty of signs in his fight against Mando Gutierrez that he could be a big deal in the UFC during his career.

Agains the more experienced Gutierrez, Rosas Jr showed off a strong ground game and also didn’t look lost in the striking like many grapplers do early in their careers.

As long as the UFC doesn’t rush him into deep waters too quickly and instead allows him to develop early in his career, “El Niño Problemo”, could turn into a real star for the organization.

MMA fans will be anxiously awaiting his UFC debut to see just what the future may hold for this potential future star of the sport. We do at least know one thing about his future already, He should have plenty more UFC contracts that his parents won’t have to sign.