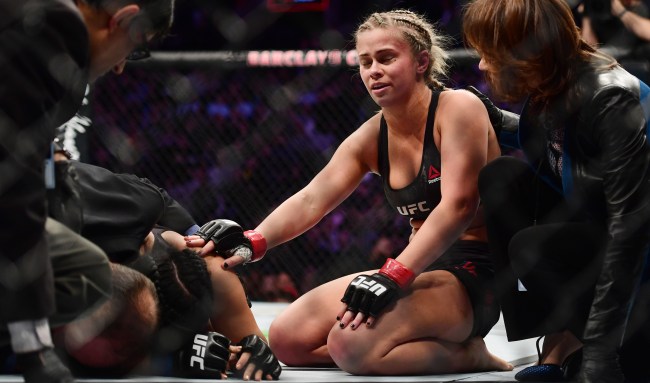 Remember back in January of 2018 when UFC star Paige VanZant fought for two rounds with a broken arm? No? Well, she did and it was pretty nasty.

It put her on the shelf for just over a year thanks to her having to have a second, more serious surgery after the initial procedure failed.

VanZant finally returned to the UFC on January 19 of this year, looking impressive while defeating Rachael Ostovich with an armbar submission in the second round at UFC Fight Night 143 in Brooklyn.

At 8-4, 1-1 since her move up to the UFC’s flyweight division (after showing the brutal effect cutting weight had on her), VanZant was back on track and reportedly expected to fight Montana De La Rosa on April 13, 2019 at UFC 236 in Atlanta.

That, however, is now not going to happen. Nor is VanZant going to fighting anyone anytime soon, because she revealed on social media Thursday night that she broke her arm again along with a photo showing a large amount of sweeling.

Well…. I fractured my arm again. So there’s that.

I’m not a doctor, but I did stay at a Holiday Inn once and that does not look good.

VanZant didn’t say if she will require another surgery on her arm, but based on that photo it’s going to be awhile before she gets into the octagon again.

Reactions from her fans were about what you’d expect…

Are you going to require surgery pic.twitter.com/Tz3oBqWJVO

WTH I thought you were on vacation in Alaska? I'm sorry you fractured your arm again. pic.twitter.com/Gg63Q7BHkl