Paige VanZant Fought Two Rounds With A NASTY Broken Arm At UFC St, Louis, Is Up For Joining WWE 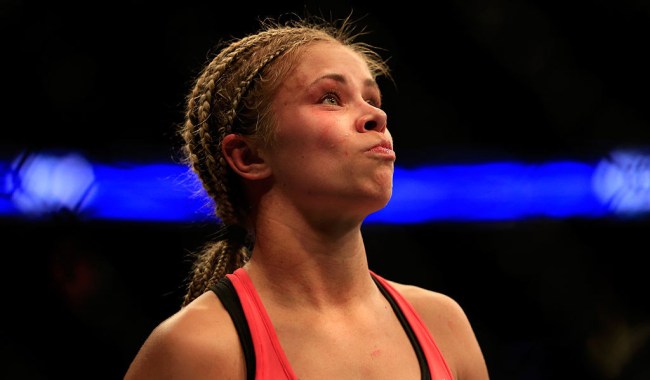 On Sunday night, one-time rising UFC star Paige VanZant made her first appearance in the Octagon since being submitted by Michelle Waterson (after a brutal weight cut) more than a year ago. It didn’t go very well.

VanZant faced off against Jessica Rose-Clark at UFC Fight Night 124 and lost via unanimous decision, her second loss in a row and third in her last four fights.

That being said, no one will EVER argue VanZant’s toughness as at one point during the fight she broke her arm using a spinning back fist against Rose-Clark. Rather than quit, like most normal people would have (wait until you see the x-ray, yikes), VanZant somehow continued to battle on for the better part of two more rounds.

PVZ in between rounds: "I broke my right arm." 😳#UFCSTL

Geez pvz is tough. Stuck in a triangle for what seemed like 2 min before the bell went then said she thinks her rt arm is broken…

“Well… I broke my arm in the first! I was able to finish the fight but as you can see, had a hard recovering and throwing my right. I’ll be back better and stronger than ever! it’s all apart of the fight game. God had other plans for me. darn spinning back fist,” the 23-year-old VanZant, ever the optimist, tweeted from the hospital.

Well… I broke my arm in the first! I was able to finish the fight but as you can see, had a hard recovering and throwing my right. I’ll be back better and stronger than ever! 💪🏼🦁 it’s all apart of the fight game. God had other plans for me. 🙏🏼 darn spinning back fist. pic.twitter.com/v5DhSv5YxD

And that’s the shot that broke my arm lol @missjessyjess you got a hard head girl!! Congrats tonight. Tough as nails https://t.co/khKxLO1ugB

Spinning back fist from @PaigeVanzantUFC lands, then she gets JRC to the ground! #UFCSTL pic.twitter.com/xh50dh4W4t

Amazingly, some people had the third and final round actually going in VanZant’s favor. Alas, with the broken arm and all, it was not enough and she fell to 7-4 after starting her MMA career white hot at 6-1.

Despite her claim that she will be “be back better and stronger than ever,” VanZant admitted prior to the fight that Ronda Rousey isn’t the only mixed martial artist with her eyes on the WWE. VanZant too says she loves pro wrestling and told TMZ Sports﻿, “If the knock comes onto my door, I’m taking it… when the time is right.”

Even though she won’t admit it now, the time actually might not get any better for a move to the WWE than it is right now. If she loses her next fight she might just drop into complete irrelvancy in the fight game.

Plus, based on all of the plans for 2018 she talks about in the video below, she doesn’t exactly sound like someone with the laser-focused mindset you need to become a combat sports champion.