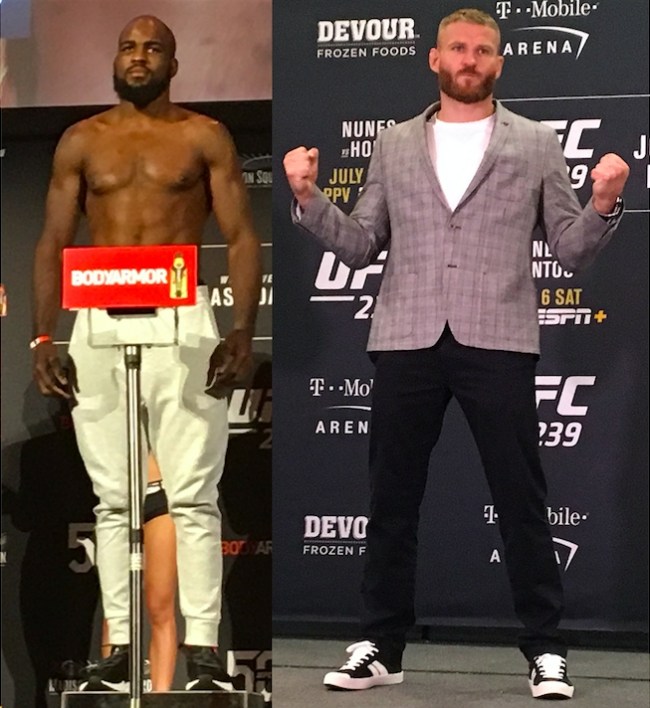 Another week, another UFC fight card.

This time, it’s light heavyweights Corey Anderson and Jan Blachowicz in the main event. It’s a fight with major potential implications, and it all goes down this Saturday, February 15 at the Santa Ana Star Center in Rio Rancho, New Mexico.

The UFC Rio Rancho card actually has some pretty good, low key fights. It’s definitely more of a diehard kind of event, but even if you’re not able to sit down and watch the entire event, there are a few fights worth checking out, beginning with the main event, a rematch which features a pair of top-10 light heavyweights.

For Anderson, who’s ranked fifth in the division, an impressive win at UFC Rio Rancho is essential if he’s to finally earn the title shot that has eluded him so far during his UFC run. In the midst of a four-fight win streak, Anderson’s stock has never been higher, especially after starching coveted prospect Johny Walker last November at UFC 244.

With some sort of stoppage against Blachowicz, Anderson can very well leapfrog recent challenger Dominick Reyes, who lost a controversial decision against champion Jon Jones, but it will take a highlight reel moment to secure a title shot.

The path for Blachowicz is a little less clear, given his most recent lackluster performance at UFC Sao Paulo. But there’s always an outside chance that the powerful Pole can find the finish. It’s not exactly a pick ‘em kind of fight (Anderson is a -210 favorite), but both fighters have clear paths to victory, and this should be an entertaining bout between two guys who know they have to leave it all in the Octagon if they’re to have any shot at earning a fight against Jones.

And now, let’s take a look at a few more fights that will go down at UFC Rio Rancho …

The UFC Rio Rancho co-main event, this bout between Diego Sanchez and Michel Periera is actually sort of a weird booking.

Sanchez is a UFC legend, a former lightweight title contender, and the lone remaining cast member from the original season of The Ultimate Fighter still competing inside the Octagon. Pereira is a massive welterweight turned viral phenom on account of his flashy moves and style. He also missed weight and majorly gassed out in his last fight, losing a decision (along with $50,000 in bonus money) to a natural lightweight.

And still, all anyone remembers are Pereira’s dancing walkout and his high-octane acrobatics, the looked impressive, but proved to be ineffective.

On paper, Pereira enters the bout as the favorite (-160). Those are reasonable odds given the major size difference and Pereira’s power. But you can never really count Sanchez out. He’s just been around too long and seen too much for anyone to really think he doesn’t have a shot. Sanchez also has the advantage on the ground. It’s just unclear if the underdog (+140) will actually be able to take Pereira down.

Overall, I’m leaning Pereira by knockout here, but should Sanchez survive the first round, it’s possible that he can drain the Braziian’s gas tank and do some slow and steady damage later in the fight.

Kicking off the UFC Rio Rancho main card is a fun lightweight scrap between a pair of sluggers.

While “Groovy” Lando Vannata and honorary Diaz brother Yancy Medeiros may not have the best records inside the Octagon, both fighters are known for the action they deliver.

For Vannata, a win at UFC Rio Rancho is more than imperative. He needs to win to keep his job with the UFC.

Talented, creative, and entertaining, Vannata burst onto the scene with as a late replacement to fight Tony Ferguson in 2016, delivering a blistering performance in his UFC debut. Despite losing to Ferguson, Vannata quickly made a name for himself and became a fan favorite. However, with a record of 2-4-2 inside the Octagon (yes, he’s somehow managed to have two draws in a sport where draws are super rare), Vannata is definitely on the chopping block, especially in a division as stacked as lightweight.

Medeiros is in equal need of a win at UFC Rio Rancho. Coming off two straight defeats via TKO stoppage, Medeiros could be on the verge of his release from the UFC should he drop a third consecutive bout.

These back stories of desperation, complemented by the fact that both Vannata and Medeiros like to stand and bang, as they say, is a perfect recipe for a wild affair between strikers.

All of these fights have serious potential for serious action, but the standout bout on the prelims has to be a scrap between former title challenger John Dodson and Nathaniel Wood, one of Europe’s top prospects.

For Dodson, who is basically in the twilight of his MMA career, UFC Rio Rancho represents an opportunity for the thirteenth-ranked bantamweight to perform in front of his hometown crowd. However, for Wood, this could really be a major coming out party.

Thus far, Wood has looked exceptional in the UFC. He’s 3-0 inside the Octagon with three submission victories. Overall, he’s won eight straight fights by stoppage, and he’s a well rounded fighter who can do damage with his hands while on the feet, which complements a slick submission game.

Wood will be hard pressed to finish Dodson though. In 31 professional fights, Dodson has never been stopped, which is super impressive, given that he fought Demetrious Johnson twice, along with bantamweight killers like Marlon Moraes, Petr Yan, Jimmie Rivera, and John Lineker.

Basically, on the best fighters in the world have been able to beat Dodson, a loser of two straight. So, if Wood wants to stake his claim and continue to climb up the ranks towards title contention, a win over Dodson would be a major, major feather in his cap.