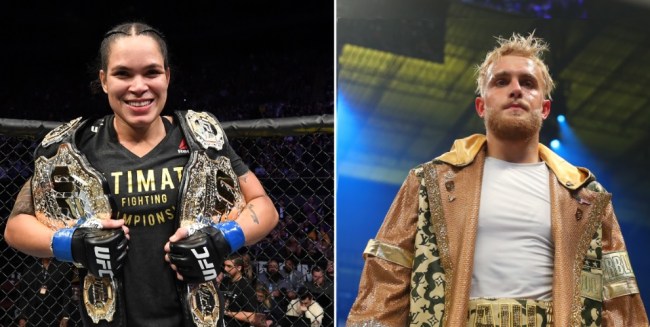 It seems like everyone wants a piece of Jake Paul these days.

Two weeks ago, Paul went viral with his knockout of former NBA star Nate Robinson. Since then famous Youtuber has gone out to call out UFC’s Conor McGregor several times.

On Monday, Paul uploaded a video where he disrespected the hell out of McGregor while challenging the Irish MMA superstar to a fight.

What the fuck is up, you Irish cunt? Good morning, Conor McGregor, I know you’re probably beating up old dudes in a bar right now, or maybe you’re jacking off because you’re sick of fucking your wife, I mean, she’s a four, Conor, you could do a lot better. But happy Monday! My team sent you a $50 million offer this morning! $50 million cash, proof of funds, the biggest fight offer you’ve ever been offered.

“But you’re scared to fight me, Conor, you’re duckin’ me ‘cause you don’t wanna lose to a fuckun’ YouTuber. You’re 0-1 as a boxer, I’m 2-0 as a boxer. I just came off the eighth-biggest pay-per-view event in history. But you wanna fight Dustin Poirier, who has less followers on Instagram than my fucking dog — that’s a fact.

In the video, Paul also went on to take a shot at UFC President Dana White, who stated McGregor would never fight him.

White immediately fired back and said he was thinking of setting Paul up with UFC women’s champion Amanda Nunes so that she could knock him out.

It seems like Nunes, who is considered the greatest women’s mma fighter of alltime, is into the idea of fighting the Youtuber.

There’s no doubt that Nunes would definitely crush Paul in a fight.