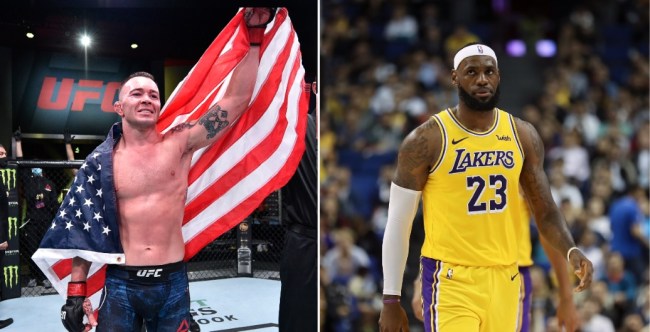 UFC star Colby Covington has inserted himself in the LeBron James-Zlatan Ibrahimović beef.

Earlier this week, Zlatan criticized LeBron because he felt athletes/celebrities should stay out of politics.

During the Lakers postgame press conference on Friday, LeBron said he will “never shut up about things that are wrong” while responding to Zlatan’s criticism.

LeBron responded after Zlatan Ibrahimovic criticized him for his activism.

“I’m kind of the wrong guy to actually go at because I do my homework.” pic.twitter.com/VyKgBrYuiz

Covington, who has been critical about LeBron in the past, called out the NBA superstar for not speaking out against China despite being an advocate for social justice.

When are you gonna speak up about Hong Kong @KingJames? Oh that’s right, you can’t. You’re a Chinese finger puppet! You make millions playing a kids game & talk about “social justice” but have no problem paying Chinese women in sweatshops pennies to make your products. Slimeball. https://t.co/nPhD5OQEOC