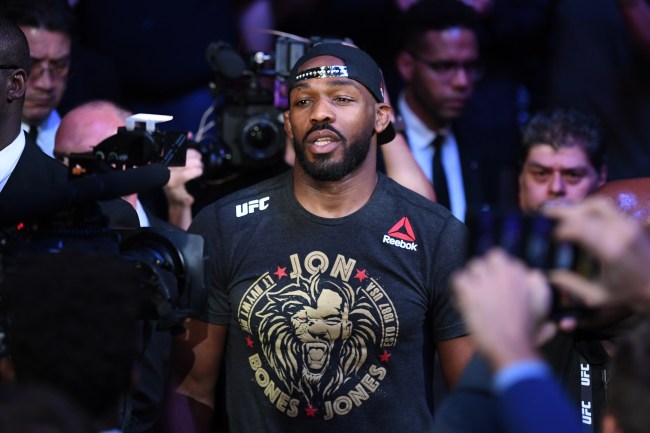 UFC light heavyweight champion Jon Jones has been proactive in the community amid the protests against police brutality that have taken place in his hometown of Albuquerque, New Mexico.

On Sunday, the peaceful protests in Albuquerque, unfortunately, devolved into looting and violence late into the night.

Protests devolved into violence after midnight on Central in #Albuquerque. A fire was set in the intersection of 3rd and Central, and windows were busted out at Filling Philly’s, Jimmy Johns, and other businesses. @KOB4 pic.twitter.com/Q8Vo4vsyyR

Police are in full riot gear in downtown ABQ. Vandals are breaking windows. All this after a peaceful protest earlier pic.twitter.com/NnHeX7YSXU

Jones hit the streets on Sunday to protect his city and confronted a pair of vandals to stop them from defacing local businesses by taking away their spray cans.

Good on him. We need more influential people to rein in those looking to destroy.

Can you imagine how terrified the guys were when he said give me the spray can? #UFC pic.twitter.com/dCUCCWiLr2

Is this shit even about George Floyd anymore?!? Why the fuck are you punk ass teenagers destroying our cities!?? 🤬🤬 As a young black man trust me I’m frustrated as well but this is not the way, we are starting to make a bad situation worse. If you really got love for your city (505), protect your shit. All you old heads need to speak up, call your young family members and tell them to come home tonight.

On Monday afternoon, Jones took his community activism a step further when he lent a helping hand to local businesses directly affected by looters during the protests.

Lots of work to do out in the streets today men. If you’re a real one, call your boys and get to work. #merica 💪🏾💪🏼💪🏻 pic.twitter.com/P5MC43lGmR