Remember That UFC Chick Who Pooped Her Pants Mid-Fight? Well, A Fan Is Trying To Buy The Poopy Shorts For Thousands 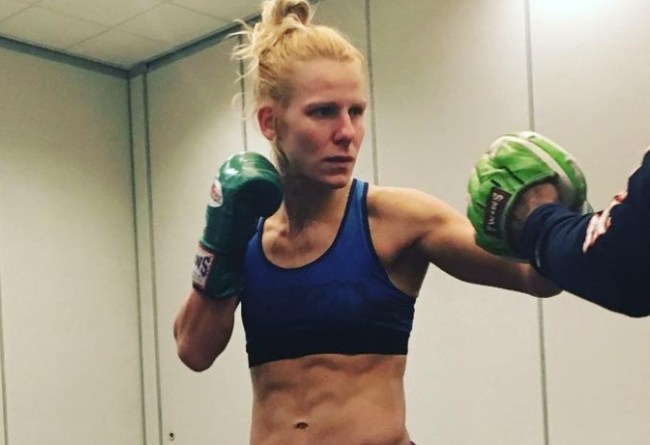 I know many of us have lived under the blissfully ignorant impression that girls don’t poop. Welp, that hypothesis was broken last weekend at a UFC Fight Night event in Oklahoma City when Russian-American MMA fighter Justine Kish deuced in her pants while trying to escape a choke hold late in fight.

Justine Kish shit the cage #UFCOKC a close look at when and where pic.twitter.com/buTFd5UjJ9

After Kish took the L, she hopped on Twitter to make light of her dumpy pants.

I am a warrior, and I will never quit #ShitHappens haha be back soon.

As it turns out, shitty her pants may have been one of the best financial decisions the 29-year-old could have made.

The most lucrative offer I’ve got is someone messaged me and said, ‘hey, I would like to buy your shorts to hang them up and blah blah blah, in my man cave.

I was like, this is disgusting – there are some really disgusting people out there.

He gave me his name, his email address, all these things.

I really don’t want to give too much details, but that was the most lucrative offer and I’m not gonna… I mean, why?

People are saying, ‘send them over, just go do it,’ I’m like, ‘oh, alright, well I’ll give him my information, but I don’t see how this is actually real’.

There are some strange people out there, my friend.