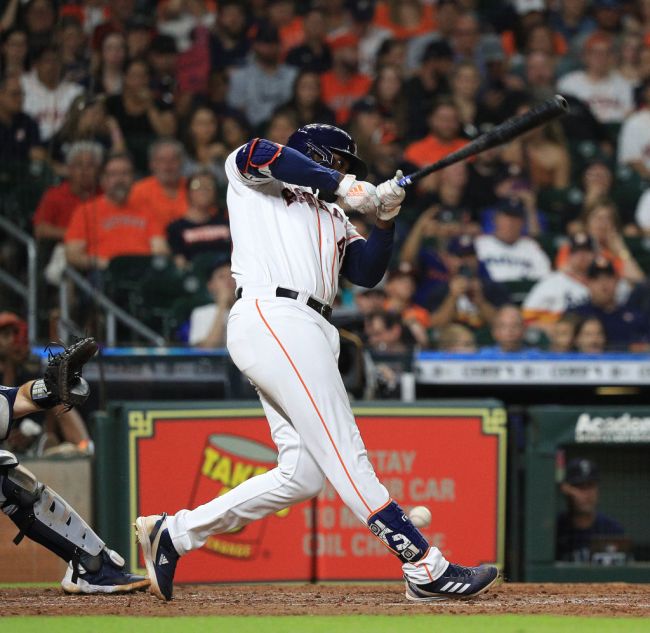 It’s one of the world’s most common pieces of sports trivia. It’s even mentioned in a song that plays during the 7th inning stretch of baseball games. 1, 2, 3 strikes you’re out at the old ballgame.

Somehow, it seems the umpire in today’s game between the Houston Astros and Boston Red Sox managed to forget that rule.

In the bottom of the 3rd inning, Yordan Alvarez stepped up to the plate with no outs and the Astros leading 4-0.

Alvarez took the first pitch for a ball. Then he took the second for a strike right down the middle of the plate. Alvarez finally swing at the 3rd pitch of the at-bat, but fouled the pitch off to move the count to 1-2.

On the 4th pitch of the at-bat, Red Sox pitcher Rich Hill caught the top left corner of the strike zone, seemingly striking Alvarez out. However, the empire didn’t ring Alvarez up.

Instead, he was allowed to face a 5th pitch in the at-bat. Luckily, the error from the umpire didn’t end up making an impact on the game as Alvarez grounded out on the next pitch.

Yordan is so good the ump gives him 4 strikes @Starting9 pic.twitter.com/Of3l5Zx0lD

The day wouldn’t get any better for the Red Sox after this incident. The Astros added 2 more runs in the 5th inning and won the game 6-1.

The loss dropped the Boston Red Sox to 53-53 and ensured they would remain in sole possession of last place for at least another day. Meanwhile, the Houston Astros improved to 68-38 as they continue to chas the New York Yankees for first place in the American League.

Luckily, this error had no effect on the outcome of today’s game, but mistakes like this make it easy to see why robot umpires are such a popular topic of conversation in the baseball world these days.