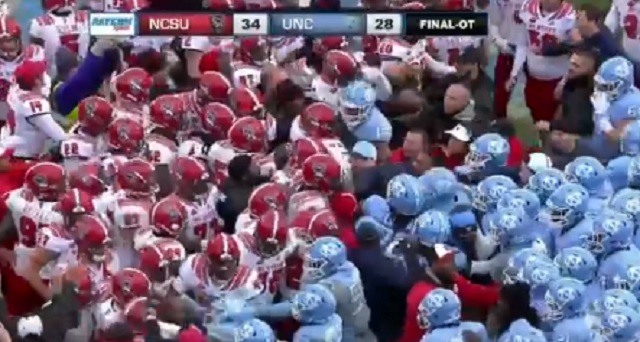 Watch as UNC and NC State players brawl after Reggie Gallaspy’s fifth rushing touchdown of the game to clinch a 34-28 win over UNC-Chapel Hill in overtime.

NC State & UNC love us so much they not only went to OT but then got into a brawl after the game just to give us a few more minutes of Raycom Sports. pic.twitter.com/cTDHb71dyk

They were just congratulating each other after the game…

what an embarrassing display

Why fight now. You had 4 quarters and then some to fight to win the game. 🤔

No surprise. UNC has been an ethically challenged program for a LONG time. Nice look after loss, Tarheels👍🏽

Looks to me like two teams that have to forfeit bowl games (I know UNC isn’t bowl eligible, but if they were…).